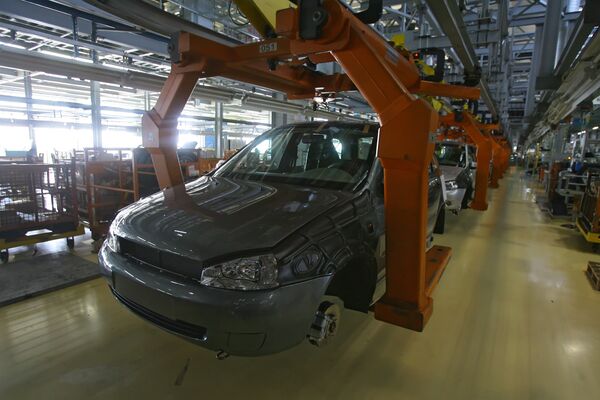 © RIA Novosti . Sergey Berezin
/
Go to the photo bank
Subscribe
Sales of new cars in Russia plummeted 49% in 2009 from the previous year's record high to 1.46 million vehicles, the Association of European Businesses (AEB) reported on Thursday.

Sales of new cars in Russia plummeted 49% in 2009 from the previous year's record high to 1.46 million vehicles, the Association of European Businesses (AEB) reported on Thursday.

Jahn said that car sales were expected to grow to some 1.5 million vehicles in 2010 as Russia was recovering from the effects of the global economic crisis that had affected consumer demand in the country.

Meanwhile, the ailing Russian car giant AvtoVAZ said on Wednesday it planned to increase output more than 50% in 2010 to 446,000 vehicles in an apparent bid to compensate for a slump in sales last year.

The debt-saddled car giant, located in Togliatti in the Volga area, is known abroad for its Lada brand. Since it was established in 1970 as a joint project with Italian carmaker Fiat, it has made more than 25 million Lada cars, but last year just 294,700 rolled off its production lines.

AvtoVAZ has been hard hit by the global economic crisis, with sales plummeting due to reduced consumer demand and low-quality cars compared to foreign competitors.

With the federal program of cheap loans to individual buyers of domestic cars apparently failing last year amid a consumer slump, the Volga auto giant is pinning fresh hopes on a new scheme proposed by the Russian government for this year.

The scheme, which is similar to the "cash for clunkers" program in the United States, has been developed by the Industry and Trade Ministry to encourage consumers to trade in older, less fuel-efficient vehicles for new ones that get better fuel economy by providing a certificate for 50,000 rubles ($1,650) towards the purchase of a new Russian-produced vehicle.