Moscow again steps back from plan to stop snow 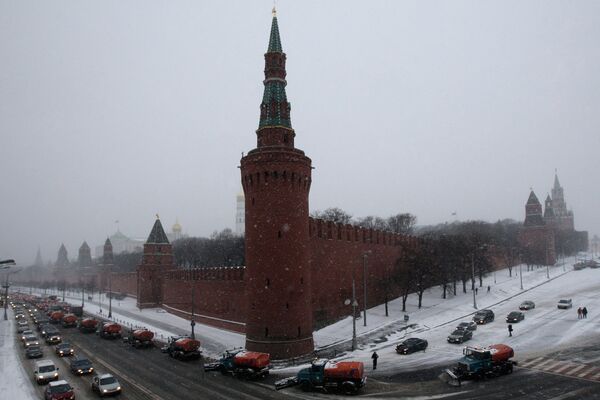 The Moscow government will not launch a snow prevention program until it obtains a feasibility study on its effectiveness, the city's economy chief said on Thursday.

The Moscow government will not launch a snow prevention program until it obtains a feasibility study on its effectiveness, the city's economy chief said on Thursday.

Moscow Mayor Yury Luzhkov in August first suggested the idea of dispersing snow clouds. The city is expected to economize 300 million ($10.1 mln) from the experiment scheduled for February.

The program envisages the dispersal of clouds in winter to prevent snow from falling in the city center, which would theoretically lead to a reduction in budget expenditures on snow removal equipment and personnel, as well as relieving winter traffic in Moscow's already snarled streets.

"We will not indulge in any experiment until we get a feasibility study," Pyotr Biryukov said, assuring reporters that the novelty would not harm the city's environment.

However, Luzhkov's initiative has provoked criticism on the part of many Muscovites and a number of scientists. Roman Vilfand, director of the Russian meteorological service, said he was not aware of any research that could prove the efficiency of cloud dispersion in winter.

The Moscow Region's Ecology Minister Alla Kachan expressed worry that the dispersion of snow clouds away from Moscow could affect the climate on the outskirts of the capital, where more precipitation would fall as a result.

Biryukov described December 2009 and the first two weeks of January 2010 as "an extreme time" for utilities services in Moscow, where almost a meter of snow fell.

"This did not halt traffic, and Moscow airports worked without any problems," the Moscow official said, adding that European capitals would be "stuck" if they had the same snow conditions.

Hundreds of people have been left stranded at airports or cut off in their own homes as heavy snow and freezing conditions continued to affect transportation across Europe earlier this week.