Russia plans to cut alcohol consumption in half by 2020 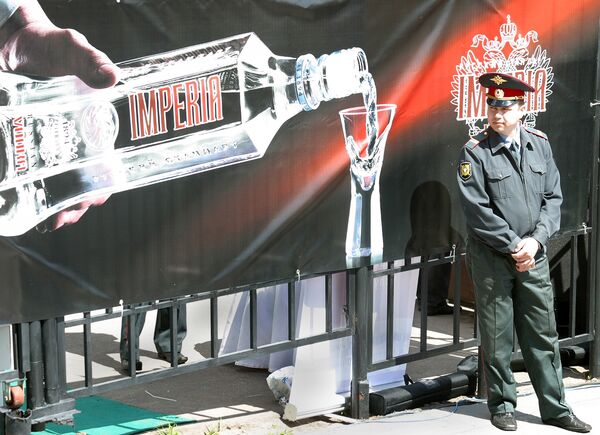 © RIA Novosti . Yekaterina Chesnokova
/
Go to the mediabank
Subscribe
International
India
Africa
Prime Minister Vladimir Putin has approved a national concept to fight pervasive alcohol abuse in Russia with the target to cut alcohol consumption in half by 2020 and uproot the illegal market.

Prime Minister Vladimir Putin has approved a national concept to fight pervasive alcohol abuse in Russia with the target to cut alcohol consumption in half by 2020 and uproot the illegal market.

Measures to achieve the goals include the introduction of criminal punishment for alcohol production and sales violations, advertising restrictions, a pricing policy dependent on quality, and efforts to promote a healthy lifestyle, the Russian government said on its website on Wednesday.

"The first phase (2010-2012) will include measures to cut alcohol consumption by 15% per capita... The second phase (2012-2020) will see the elimination of the illegal alcohol market and a reduction in consumption levels by 55%," the government said.

The concept is designed to reduce the high mortality caused by alcohol abuse especially among men. More than 23,000 people die of alcohol poisoning annually, while another 75,000 die of alcohol-related diseases, according to official statistics.

Alcohol consumption in Russia is more than double the critical level set by the World Health Organization, a WHO report said last fall. President Dmitry Medvedev has urged measures to fight the national woe.

As part of the campaign, Russia introduced on January 1 a minimum price of vodka in an effort to fight counterfeit alcohol production in the country.

The last Russian leader to try to cut alcohol consumption was Mikhail Gorbachev, who in May 1985 attempted to put an end to the rampant alcoholism that was already taking its toll on theSoviet Union's economy and health system.

His efforts were ultimately unsuccessful, however, and the illicit production of moonshine — 'samogon' — rocketed, not to mention a sudden rise in sales of medicinal and industrial spirit. The never-popular policy of prohibition was later quietly dropped.