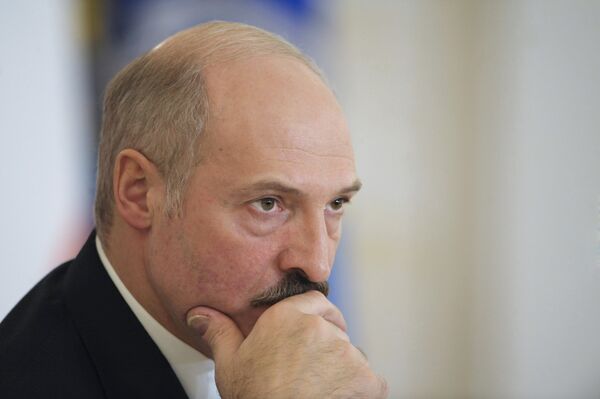 Belarusian President Alexander Lukashenko on Wednesday addressed a letter to Russian President Dmitry Medvedev on Belarus's position in regard to oil deliveries.

Belarusian President Alexander Lukashenko on Wednesday addressed a letter to Russian President Dmitry Medvedev on Belarus's position in regard to oil deliveries.

Belarus benefited from significant discounts on Russian oil imports in 2009, and is again seeking preferential treatment this year. Russia says it is willing to eliminate all duties on oil supplied to Belarus for domestic consumption, but wants oil bound for European markets to be subject to duty. Russia has warned Belarus that it will have to pay full duty on all oil delivered while no agreement is in place.

"At the end of last year, Belarus and Russia began talks on oil deliveries, which have shown no results," the Belarusian presidential press service said.

In December, Moscow and Minsk reached an agreement that Belarus would receive oil deliveries duty free during the first two to three months of 2010, during which time the two countries would continue negotiations on the conditions of future oil deliveries for 2010.

"However, Russia has practically declined the drafted contracts and has put forward unacceptable conditions for Belarus. This is the reason the president of Belarus sent a letter to the Russian president outlining Belarus's position on this issue," the Belarusian press service said.

The contents of the letter were not disclosed.

A Belarusian delegation left Moscow on Saturday without reaching a deal, reviving fears of supply cuts to the European Union. The former Soviet states blamed each other for the failure to reach a new agreement.

A dispute between Moscow and Minsk in 2007 led to disruptions in supplies to Poland and Germany.

Russia has had frequent disputes with its former Soviet neighbors over energy prices in recent years, as it has moved to bring tariffs closer to free market levels. Western powers have accused Russia of using energy as a political tool in relations with Ukraine and Belarus, major transit nations for its Europe-bound natural gas and oil flows.