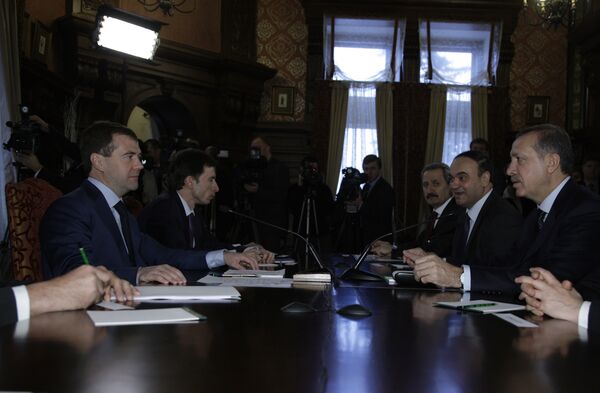 Turkish Prime Minister Tayyip Erdogan, who has come to Russia on a two-day visit, will meet with President Dmitry Medvedev and Prime Minister Vladimir Putin on Thursday to sign agreements on multifaceted privileged partnership, also described as strategic partnership.

Turkish Prime Minister Tayyip Erdogan, who has come to Russia on a two-day visit, will meet with President Dmitry Medvedev and Prime Minister Vladimir Putin on Thursday to sign agreements on multifaceted privileged partnership, also described as strategic partnership. The latter implies political cooperation and even regular ministerial meetings.

The question of which of the two countries needs oil and gas pipeline friendship more is no longer on the agenda. Everything has become so mixed up in this area that it is very difficult to say where the pipes end and policy begins.

This time, Erdogan and Putin will discuss major projects like the South Stream and Blue Stream natural gas pipelines and the construction of Turkey's first nuclear power plant.

Construction of South Stream, which is to ship Russian natural gas to Greece, Italy and Austria across the Black Sea, is to begin in November 2010. The second leg of Blue Stream will export Russian gas to Israel, Lebanon, Syria and Cyprus via Turkey.

The talks in Moscow will also focus on the $1.5 billion Samsun-Ceyhan pipeline to bring Caspian oil to the Mediterranean via Turkey and on extending contracts for the purchase of Russian gas.

Taken together, these contracts will turn Turkey into the largest energy hub in the Caspian region, Southern Europe and the Middle East.

Russia will now have two major energy partners, Germany in the north (Nord Stream) and Turkey in the south (South Stream). No wonder Europe becomes jittery every time Turkish president or prime minister goes to Russia, or their Russian counterparts visit Turkey.

Europe assumes that Turkey is leaning increasingly toward Russia and fears that this may revive Russia's "imperial ambitions."

Turkey has indignantly rejected such accusations, pointing out that it has signed a deal on the EU-backed rival pipeline Nabucco. It does not intend to give up the project, and Prime Minister Erdogan reputedly intends to invite Russia to join the Nabucco project during the ongoing visit.

In fact, the EU is pushing Turkey toward Russia by putting off its admission to the European Union. Turkey started accession talks in 2005 but has so far advanced only in 12 of the 35 political and economic areas where each candidate is obliged to carry out reforms to adjust them to the EU standards.

Last year, France and Germany said they were not eager to admit a country with a 60-million Muslim population to the EU.

In short, Turkey is unlikely to join the EU in the next ten years, which is why it is looking for an alternative option in strengthening its political and economic standing in the region. And it cannot do this without Russia's assistance.

Turkey can easily attain its goal if it becomes the oil and gas dispatcher for Southern Europe and the Middle East.

It has been trying for years to get a standing in the Caucasus, which does not have a regional leader, and coordination of positions with Russia could help it attain its goal.

So far, Azerbaijan has been leaning toward Turkey and Iran, Armenia has always had very close ties with Russia, and Georgia has focused on NATO and the United States. It is especially dangerous when these South Caucasus states move (or are pulled, as in the case of Georgia) in different directions, as the 2008 war in South Ossetia showed.

If Turkey and Russia move on from coordinating energy policies to regional security, this could encourage the region to consider creating a regional security structure with clearly defined responsibilities and rights in relations with neighbors. The OSCE, the EU and the UN have failed to do this, so why cannot Russia and Turkey have a go in the framework of a Caucasian stability forum, which Turkey proposed establishing last year?

Europe, NATO, the United States, Asia and the Muslim world have always been wary of Turkey's relations with Russia.

Turkey is a unique country in terms of its relations with Russia. As part of the Ottoman Empire since the 14th century, Turkey has had alternating periods of hostile and almost brotherly relations with Russia. We have grown used to this love-hate relationship, and are currently enjoying the benefits of its positive phase.

Turkey is the only NATO country with which Russia has signed over 60 treaties, agreements and other documents promoting friendship. The two countries maintain regular contacts at the political, including government, level as well as in the economy, where their relations range from fishing to oil, gas and nuclear energy.

And now they are considering multifaceted strategic partnership, possibly influenced by the unfailing attraction of hydrocarbons.