Russia to mourn Perm victims on 40th day since tragedy 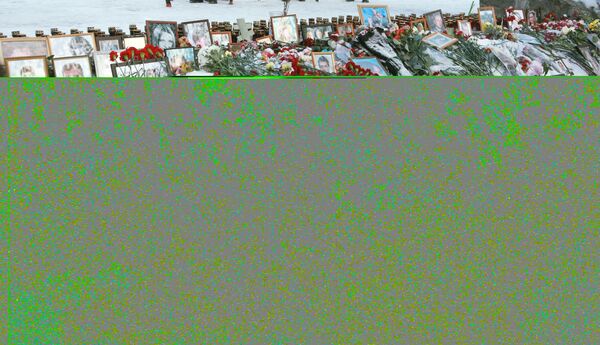 Russia on Wednesday marked 40 days since the fire in a nightclub in the Urals city of Perm that killed 155 people, holding mourning and requiem ceremonies for the victims.

Russia on Wednesday marked 40 days since the fire in a nightclub in the Urals city of Perm that killed 155 people, holding mourning and requiem ceremonies for the victims.

Relatives and friends of those dead are still bringing flowers, toys, portraits and letters to the Lame Horse bar, where the tragedy occurred in the early hours of December 5, 2009.

Russian Orthodox Christians observe a 40-day mourning period, which ends with special services, and all Perm churches were to hold requiem ceremonies on Wednesday.

"We all mourn for the victims of the tragedy, deeply empathize and share the pain of the relatives. Orthodox Church is praying about health and quick recovery of the injured and hospitalized, whose condition is still critical," Perm bishop Irinarkh said.

In the days immediately after the accident, more than 20 million rubles ($670,000) were donated to different funds to support those affected by the tragedy.

Many of the partygoers had extensive burns and severe respiratory injuries, and 55 people are still undergoing treatment in hospitals, mostly in Moscow and St. Petersburg.

Nine children were orphaned by the fire, and a further 100 lost one of their parents.

The blaze, Russia's deadliest in at least half a century, engulfed the Lame Horse night club after an indoor firework display went wrong, setting fire to the wicker-decorated ceiling.

Russia's Emergencies Minister Sergei Shoigu said inspectors had for years turned a blind eye to breaches of fire safety in the Perm nightclub.

The government of the Perm region and the Perm city mayor resigned over the tragedy.

A total of 67 people died in about 600 fires that broke out in Russia on New Year's Eve and during New Year's celebrations on January 1 this year.