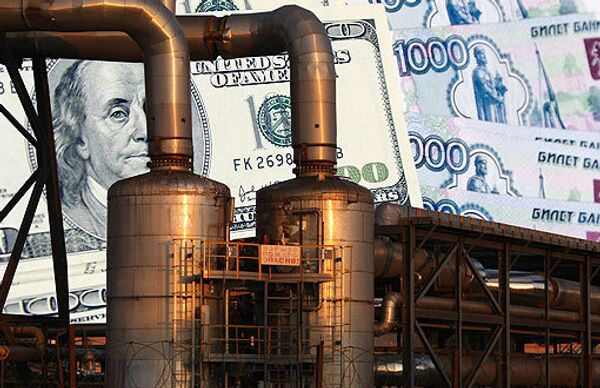 The Belarusian delegation that came to Moscow for talks on a pricing structure for Russian oil deliveries to Belarus in 2010 is flying back to Minsk for consultations, a Russian official said.

The Belarusian delegation that came to Moscow for talks on a pricing structure for Russian oil deliveries to Belarus in 2010 is flying back to Minsk for consultations, a Russian official said.

Irina Yesipova, an aide to Russian Energy Minister Sergei Shmatko, said the talks were not finished and could continue remotely.

"The representatives of the Belarusian delegation intend to fly to Minsk for consultations to clarify details. It's possible the negotiations will be remote in nature for some time," Yesipova said.

"There is a significant rapprochement between the parties on a number of issues," she added.

A source in the Belarusian delegation earlier told the Belarusian state news agency Belta that the sides had agreed to take a break from discussions to allow for "further consultations."

The source blamed the Russian position for the impasse.

"Belarusian negotiators were ready for a reasonable compromise, but Russia's side stuck to its previous position, which greatly complicated the negotiations," he was quoted as saying.

Belarus benefited from significant discounts on Russian oil imports in 2009, and is again seeking preferential treatment this year. Russia says it is willing to eliminate all duties on oil supplied to Belarus for domestic consumption, but wants oil bound for European markets to be subject to duty.

An earlier set of talks ended on New Year's Eve without agreement, picking up again on Wednesday. Russia has warned Belarus that it will have to pay full duty on all oil delivered while no agreement is in place.

The dispute between Moscow and Minsk has raised fears in Germany and Poland that supplies may be affected, as they were during a similar dispute in 2007, but so far there have been no disruptions to oil transit via Belarus, and deliveries are occurring to both Belarus's oil refineries.

Russia exported around 25 million tons of oil to Belarus last year, but only 5-6 million tons were for domestic consumption. The rest was re-exported, some after passing through one of the country's two oil refineries.