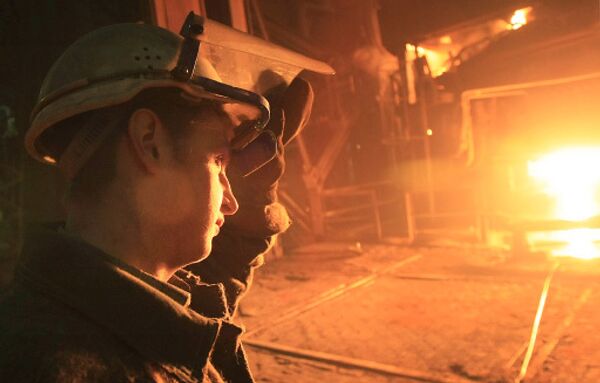 An unnamed Russian company is close to buying control of one of Ukraine's largest steel groups, Industrial Union of Donbass, The Financial Times reported on Wednesday.

The group could be sold later this month in a deal valuing it up to $2 billion, with Russia's state-run Vnesheconombank playing a role in the acquisition, the paper said.

The potential buyers include Alisher Usmanov, the mining magnate, and Evraz, a metals group in which billionaire Roman Abramovich has a stake. Both have expressed interest in the purchase in recent years, the paper said.

The Russian group would take a 50% plus one share stake, the paper said.

The news of the deal could raise political tensions in Ukraine in the run-up to this month's presidential election in the ex-Soviet republic where Yulia Tymoshenko, the prime minister, and Viktor Yanukovych, opposition leader, are both bidding to succeed the pro-west Viktor Yushchenko as president, the paper said.

Yushchenko, who is fighting a losing battle to retain office, has repeatedly accused both Tymoshenko and Yanukovich of cooperating too closely with Moscow, a claim they have both denied, the paper said.

The deal is also evidence of Russia's bid to expand its industrial grip over former Soviet Union countries, the paper said.