Roscosmos to consider project to save Earth from asteroid 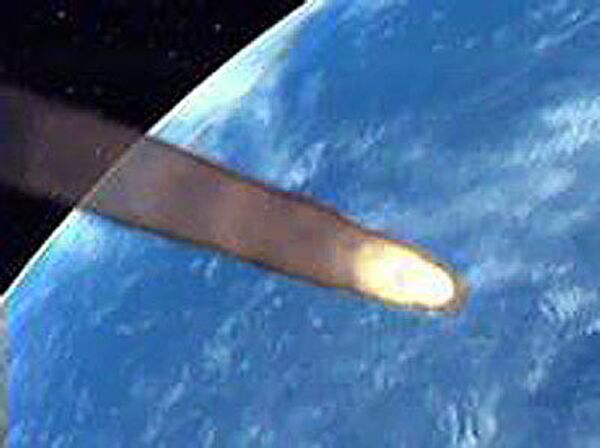 Roscosmos will soon consider a project to prevent a large asteroid from colliding with Earth after 2030, the head of Russia's space agency said on Wednesday.

Roscosmos will soon consider a project to prevent a large asteroid from colliding with Earth after 2030, the head of Russia's space agency said on Wednesday.

"A scientist recently told me an interesting thing about the path [of an asteroid] constantly nearing Earth... He has calculated that it will surely collide with Earth in the 2030s," Anatoly Perminov said during an interview with the Voice of Russia radio.

He referred to Apophis, an asteroid that he said was almost three times as large as the Tunguska meteorite.

On June 30, 1908, an explosion equivalent to between 5 and 30 megatons of TNT occurred near the Podkamennaya Tunguska River in a remote region of Russia's Siberia. The Tunguska blast flattened 80 million trees, destroying an area of around 2,150 sq km (830 sq miles).

Perminov said Russia was not planning to destroy the asteroid.

"No nuclear explosions [will be carried out], everything [will be done] on the basis of the laws of physics," he said.

The Russian space official also said after having considered the project, Russia could invite experts from Europe, the United States and China to join it.

"People's lives are at stake. We should pay several hundred million dollars and design a system that would prevent a collision, rather than sit and wait for it to happen and kill hundreds of thousands of people," Perminov said.

Though Apophis is currently considered the largest threat to our planet, NASA scientists published in October an update of its orbit indicating "a significantly reduced likelihood of a hazardous encounter with Earth in 2036."