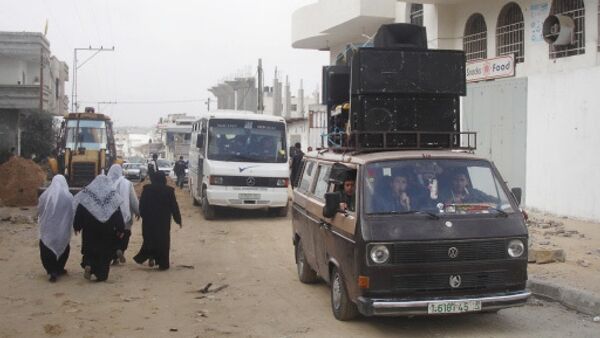 An international humanitarian convoy carrying aid to the Gaza Strip returned to Syria after Egypt had denied access to its territory, organizers told a news conference in Damascus.

British MP George Galloway, who leads the 250-vehicle convoy, told reporters that they had to return to Syria after Egypt insisted that the group must enter through the Mediterranean port of El-Arish, which is closer to the Gaza border, instead of the city of Nuweiba on the Red Sea.

More than 400 members of the convoy, including a 85-year-old Holocaust survivor, Hedy Epstein, went on a hunger strike to protest against the move.

According to the agreement with Egypt, the convoy should arrive to El-Arish by January 3, 2010. A border crossing with Gaza will be opened in the next three days. The group will be allowed only a 48-hour stay in Gaza.

The participants also plan a peaceful march from Northern Gaza towards the Erez border crossing with Israel, calling for Israel to lift the blockade on Gaza.

Egypt and Israel closed their border crossings with the Gaza Strip after Hamas seized control of the enclave in June 2007. The blockade has led to a drastic deterioration in the humanitarian situation in Gaza.