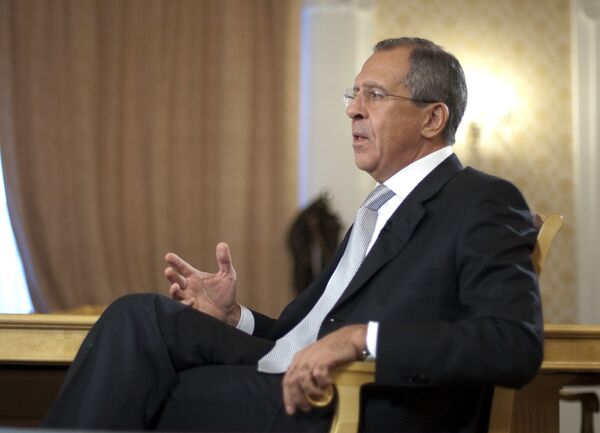 Russian Foreign Minister Sergei Lavrov said on Monday that circumstances for the resumption of talks with North Korea on its controversial nuclear program have improved.

Russian Foreign Minister Sergei Lavrov said on Monday that circumstances for the resumption of talks with North Korea on its controversial nuclear program have improved.

"The resumption of six-party talks [with North Korea] is mandatory, and now circumstances for holding them are a bit better than earlier," Lavrov said at a news conference after a meeting with his Japanese counterpart Katsuya Okada in Moscow.

"We consider it necessary to discuss all questions that arise in a particular format, taking into consideration the resolutions adopted by the UN Security Council remain in force," he said.

The Russian foreign minister answered negatively, when asked a question on whether certain parties are attempting to push Russia and Japan out of the talks.

"I do not think that someone seriously intends to move Russia, Japan or any other participant in six-party talks aside," he said, adding the attempt to hold direct talks between Washington and Pyongyang undertaken by the U.S.'s previous administration had not simply "failed," but has "contributed to the current worsening of the situation."

Katsuya Okada said in his turn that "the only way for them [the North Koreans] to overcome the current situation is to return to six-party talks."

He said the Japanese government intended to discuss issues with North Korea "on a complex basis".

The six-party talks, involving Russia, Japan, China, the United States, North and South Koreas came to a halt in April when Pyongyang pulled out of the negotiations in protest against the United Nations' condemnation of its missile tests.

When asked the question on whether North Korea will produce new rockets or nuclear weapons in 2010, Lavrov said "I have no such information as of now."

Stephen Bosworth, the U.S. special envoy to North Korea, visited the country earlier this month. The South Korean Yonhap news agency quoted diplomatic sources as saying the U.S. was ready to establish a center for bilateral cooperation in North Korea if the country returns to negotiations.

During consultations in Moscow last week, Bosworth said the U.S. will sign a peace treaty with North Korea only if it abandons its controversial nuclear program.

The North recently hinted that it was willing to return to the talks, but insisted it first negotiate directly with the United States to repair "hostile relations."