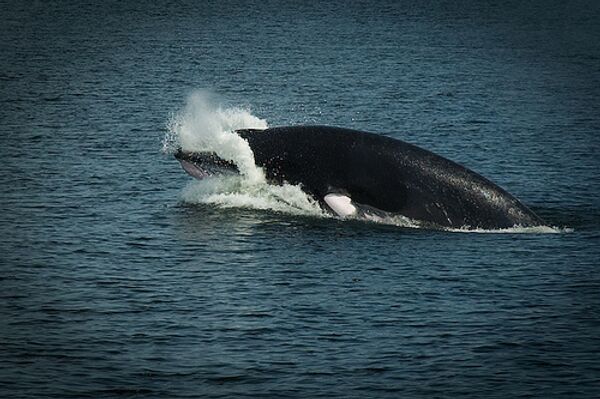 More than 120 whales died on two New Zealand beaches over the weekend after becoming stranded, the Times on-line edition said on Monday.

The first incident reportedly took place on a remote beach in the north of New Zealand's South Island on Saturday, and the second happened on the North Island's eastern coast, the paper said.

Whale beachings are common in New Zealand; however, it is rare for two to happen one after the next.

On Saturday, 105 whales beached themselves south of the tourist town of Nelson at Farewell Spit, close to the whales' migration routes, the paper said. Most of the animals died before they were spotted by a tourist plane which alerted the Department of Conservation, Times said.

On Sunday, 63 whales beached themselves on the Coromandel Pensinsula, on North Island. The paper quoted experts as saying a pregnant cow in distress might have caused the stranding.

Locals and holidaymakers reportedly saved 43 whales, measuring nine to 12 feet long, by keeping them wet in the low tide through the day. A Department of Conservation boat refloated the whales in the early afternoon, however, 21 of them died before rescuers arrived in the area, the paper said.

"The majority of beachings involve pilot whales," DOC senior adviser Mike Donaghue told Times. "They are highly social whales and if one gets into trouble the others are reluctant to abandon it."