Yushchenko pledges to pay for Russian gas on schedule 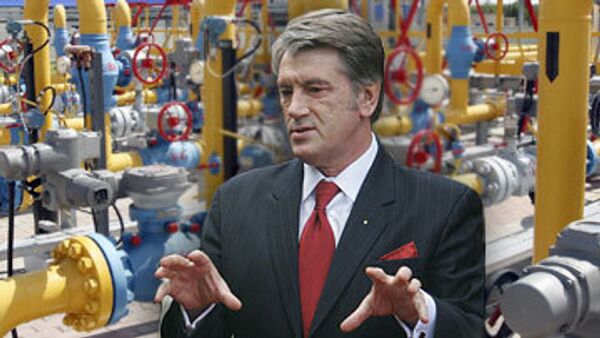 Ukrainian President Viktor Yushchenko has said his country would pay for Russian gas consumed in December on schedule.

Ukrainian President Viktor Yushchenko has said his country would pay for Russian gas consumed in December on schedule.

Alexei Miller, the CEO of Russian energy giant Gazprom, said on Friday Ukraine has consumed much less natural gas since mid-December, which may mean Kiev is experiencing difficulty in paying for Russian gas supplies.

"Ukraine will pay off... Prime Minister [Yulia Tymoshenko] is unlikely to pay off," Yushchenko, who is a candidate in the country's upcoming presidential elections due on January 17, said on air of the Inter television channel late on Friday.

The president has criticized an agreement on gas prices reached by Tymoshenko and Russian Prime Minister Vladimir Putin in January 2009.

The agreement stipulates that Kiev, which has so far paid 20% less than Russian gas consumers in Europe, will start paying the average European price from January 1.

The deadline for Ukraine's payment for natural gas supplied in December has been moved from January 7 to January 11, 2010, due to the New Year holidays.

Ukraine, which transits 80% of Russian gas to Europe, will receive a total of 27 bcm in 2009, compared to an average of 55 bcm in the pre-crisis years.

Ukraine has earlier asked Gazprom to cut natural gas supplies to 7 billion cubic meters in the first quarter of 2010, from 8.75 bcm under the existing contract.