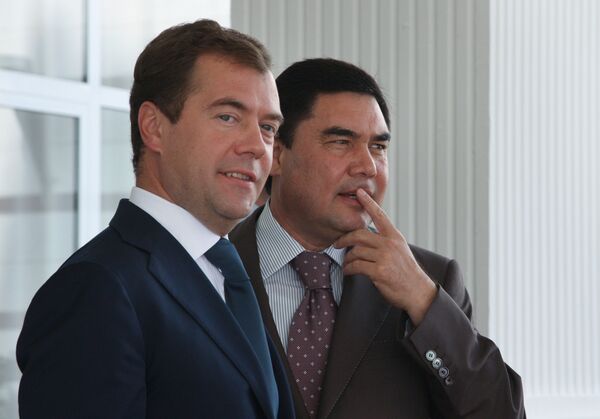 "The agreements reached during the Russian president's working visit will make it possible for us to resolve issues emerging in bilateral relations as well as widen and develop cooperation with our strategic partner - the Russian Federation," Berdymukhamedov told a cabinet session.

He said the agreements "account for Turkmenistan's geopolitical and economic interests."

Russia and Turkmenistan agreed on December 22 that the Central Asian state will resume natural gas supplies to Russia in January to deliver up to 30 billion cubic meters annually at European-level prices.

The countries' gas monopolies Gazprom and Turkmengaz signed a deal on the sidelines of Medvedev's visit to the Turkmen capital on Tuesday, ending a months-long gas dispute between the two ex-Soviet states.

Russia paid $300 per 1,000 cu m of gas to the ex-Soviet state under the previous contract, importing some 50 billion cu m, or two thirds of its own production. Supplies were interrupted in April after a pipeline explosion.

Turkmenistan accused Gazprom of failing to warn that it was reducing gas imports, resulting in a buildup of pipeline pressure that caused the blast. Gazprom reduced imports after a drop in demand from European consumers amid the global economic crisis.