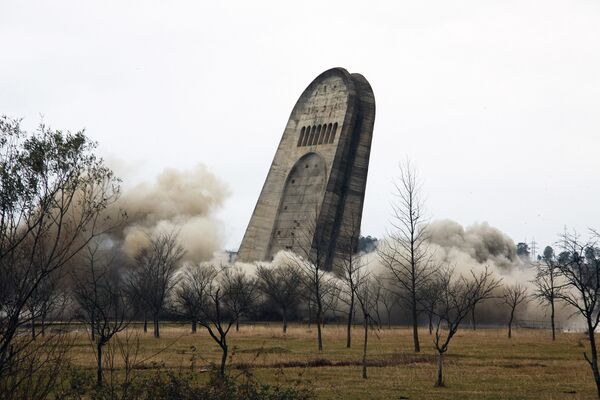 The lower house of the Russian parliament on Thursday urged foreign parliaments and international organizations to condemn the destruction of a WWII memorial in Georgia.

The lower house of the Russian parliament on Thursday urged foreign parliaments and international organizations to condemn the destruction of a WWII memorial in Georgia.

During the demolition of the Glory Memorial in Kutaisi on December 19, an eight-year-old girl and her mother were killed, when explosives used to topple the structure sent large chunks of concrete hurtling over a wide area.

"We have stated our position, and endorsed [Prime Minister] Vladimir Putin's position concerning the building of a replica in Moscow," State Duma speaker Boris Gryzlov said.

Putin proposed on Tuesday that Russia rebuild the Glory Memorial. Merab Berdzenishvili, who completed the original in 1981, has supported the idea, but said the blueprints and miniatures have been lost.

Moscow Mayor Yury Luzhkov said a replica of the memorial would be built in Moscow, and that representatives of the Georgian expatriate community will contribute to its financing.

Russian Foreign Minister Sergei Lavrov on Thursday said the demolition of the monument was "a symbolic attack on those who laid down their lives in that war, including more than 200,000 ethnic Georgians."

Georgian authorities say the memorial was removed to make way for a new parliamentary building.

The government has said that the relocation of the Georgian parliament from Tbilisi to Kutaisi will boost the development of western Georgia. However, the move has sparked protests among Kutaisi residents and the Georgian opposition.