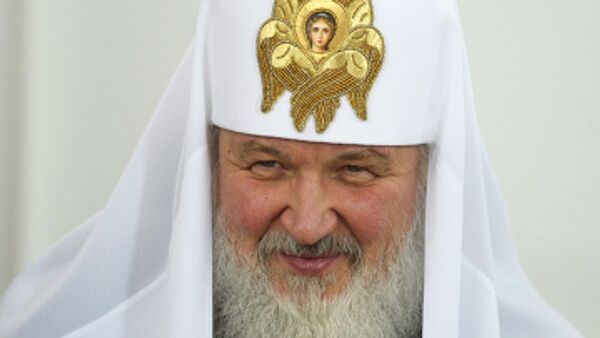 The Russian Orthodox Church condemns discrimination against sexual minorities, but treats homosexuality as a sin, Patriarch Kirill said on Wednesday.

The Russian Orthodox Church condemns discrimination against sexual minorities, but treats homosexuality as a sin, Patriarch Kirill said on Wednesday.

Meeting with the secretary general of the Council of Europe, a pan-European human rights body, in his office in the Christ the Savior Cathedral in central Moscow, the Russian church leader said: "We respect the person's free choice, including in sex relations."

But Kirill said "the religious tradition of almost all nations has treated homosexuality as a sin."

"Those who commit a sin must not be punished... And we have repeatedly spoken out against discriminating people for their nontraditional sexual orientation," Patriarch Kirill told Thorbjorn Jagland.

Kirill also said the Church is opposed to putting relationships between man and woman on par with homosexual ties.

Russia decriminalized homosexuality in 1993, a move which was necessary to join the Council of Europe. But public opinion on the issue is rather negative.

Authorities in Moscow have banned gay pride parades branding them "Satanic," triggering criticism of rights groups in Russia and Europe. Gay rights groups held their first parade in the capital regardless in 2007. The illegal festival ended in a violent clash between participants and religious radicals and nationalists.

"We would not like the Council of Europe to declare millions of Russian Orthodox believers and other believers across the world as people sharing religious superstitions," Kirill said.

Kirill also said the Russian Orthodox Church will never join those who believe euthanasia and abortions are the rights of people. "Death cannot be a solution to problems even for sick people," he said.