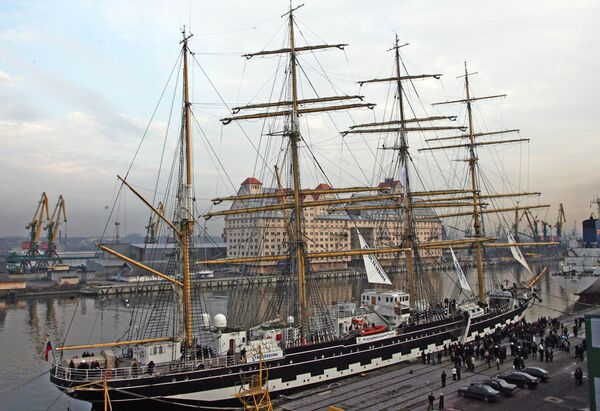 Russia's Kruzenshtern sailing ship has arrived in the Canary Islands' port of Santa Cruz de Tenerife as part of its voyage around the world, a spokeswoman for the ship said.

Russia's Kruzenshtern sailing ship has arrived in the Canary Islands' port of Santa Cruz de Tenerife as part of its voyage around the world, a spokeswoman for the ship said.

The ship left its home port in Russia's exclave city of Kaliningrad for the second stage of the International Trans-Atlantic Expedition on December 1.

The Kruzenshtern travelled to the Canaries via the North Sea and the English Channel, and finally along Spain and Portugal's Atlantic coastlines. It had earlier dropped anchor in the Belgian port of Zeebrugge, Tatyana Babushkina said.

She said a team from Russian film studio Mosfilm, led by producer Stanislav Govorukhin, was also to arrive in the Canaries, where the Passazhirka (Passenger) movie was filmed in 2007, which featured the Kruzenshtern. The city will watch a premiere of the movie, she said.

On December 23, a football match between Santa Cruz's team and the ship's crew will take place in Tenerife.

The ship will then head to the port of Colon on Panama's Caribbean Sea on December 26.

During the expedition, the Kruzenshtern is also planned to visit Vancouver, where the 2010 Winter Olympic Games will take place on February 12-28.

The International Trans-Atlantic Expedition is dedicated to the 65th anniversary of victory in World War II, and is the vessel's third round the globe voyage. During the first stage of the expedition, which began in April, the ship covered 13,700 nautical miles, and visited seven countries and 12 ports.

The ship was given to the Soviet Union in 1946 by Germany as part of World War II reparations, and was renamed in honor of a Russian admiral of German descent, Johann Krusenstern (1770-1846), who performed Russia's first round world trip. Since the 1970s the ship has been used as a training vessel for naval cadets.