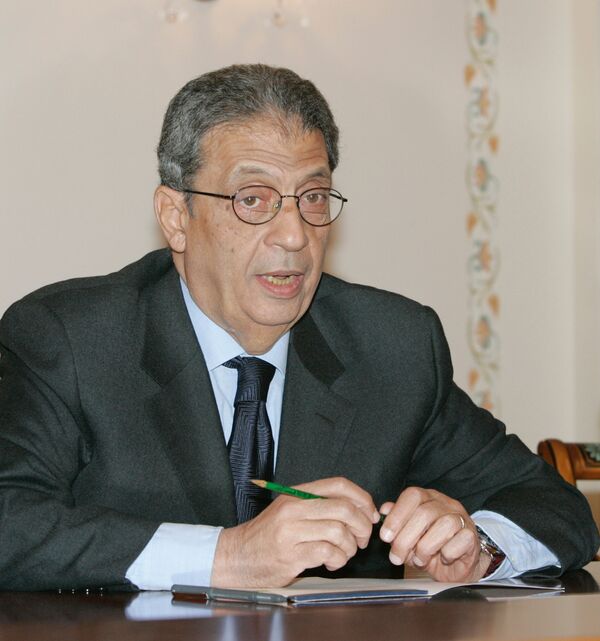 © POOL
/
Go to the photo bank
Subscribe
The United Nations should play the leading role in the settlement of the Israeli-Palestinian conflict, the chief of the Arab League said.

The United Nations should play the leading role in the settlement of the Israeli-Palestinian conflict, the chief of the Arab League said.

Earlier, Palestinian leaders, tired of fruitless efforts to see progress at talks with Israel, decided to address the UN Security Council asking it to adopt a resolution to recognize the borders of a future Palestinian state.

Moussa said the international community had relied upon the George Bush administration for eight years, which, he said, resulted in the negotiating process failure.

"The return [of the Mideast dossier] to the UN is necessary, and now a discussion of when and how it will happen is underway," he said.

Moussa said he supports the efforts by the U.S. administration led by Barack Obama to resume the peace process but added that they have so far failed to reach any result either.

"We support Obama's efforts but the U.S. president needs the support of two sides, not one," he said, adding that Israel is persistent and does not want to give up its plans to build Jewish settlements on Palestinian territories, or discuss the status of Jerusalem.

The issue of Jewish outpost construction in the West Bank is the main obstacle to reviving peace talks, and a sticking point in relations with the United States, Israel's main strategic ally.

"We keep supporting peace with Israel, but a just and balanced peace that would result in proclaiming a real Palestinian state, stopping the occupation of Palestinian and Arab territories in exchange for the recognition of Israel and final settlement of the conflict," he said.

The head of the Arab League hailed Russia's position on the Middle East settlement. Moscow earlier expressed deep concern over Israel's plans to build a large number of new housing complexes in the West Bank.

Moussa is expected to hold talks with Russian Foreign Minister Sergei Lavrov in the Arab League Headquarters in Cairo on Monday.