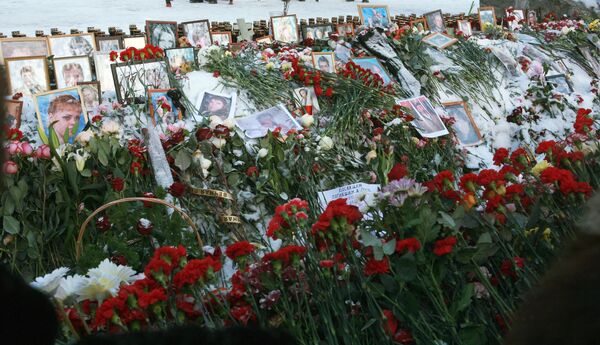 The death toll in the December 5 deadly blaze at a nightclub in the Russian city of Perm has risen to 150 as another woman died Saturday in a hospital, Ekho Moskvky radio said.

The death toll in the December 5 deadly blaze at a nightclub in the Russian city of Perm has risen to 150 as another woman died Saturday in a hospital, Ekho Moskvky radio said.

It said the woman, 38, had died at Moscow's Burdenko hospital.

About 80 people remain in hospital, with 20 in a grave condition.

The A Just Russia opposition party called for Emergency Situation Minister Sergei Shoigu's resignation on Wednesday as the death toll from a fire in a Perm night club continued to grow.

Party spokesman Konstantin Beschetnov said the emergencies ministry had failed to carry out a thorough fire safety inspection of the Lame Horse night club where the blaze took place, noting that the heaviest ever fine the club had been forced to pay was 1,500 rubles (some $50).

Shoigu said in a recent newspaper interview that inspectors had for years turned a blind eye to breaches of fire safety in the nightclub. He said a probe had revealed numerous safety violations in the club, including those committed during reconstruction work that took place several years ago.

Following a 2001 reorganization, the Russian State Fire Service was transferred from the Interior Ministry's jurisdiction and placed under the control of the Emergency Situations Ministry. There has been speculation in the media whether Shoigu, who is also co-chairman of the ruling United Russia party, would admit personal responsibility or be formally held responsible over the blaze.

The death toll from the tragedy has risen steadily throughout the week. Doctors say victims suffered extensive burns and severe respiratory injuries.