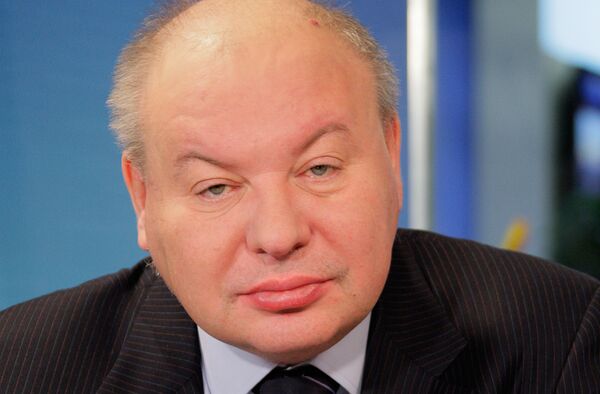 © RIA Novosti . Anton Denisov
Subscribe
Yegor Gaidar was a “fearless” but controversial figure whose name became associated with the painful reforms that accompanied the transition from a planned to a market economy, and from a Soviet one-party state to a democratic political system, in the early 1990s. His was a gargantuan role in a history that is still too politically charged to be written.

Yegor Gaidar was a “fearless” but controversial figure whose name became associated with the painful reforms that accompanied the transition from a planned to a market economy, and from a Soviet one-party state to a democratic political system, in the early 1990s. His was a gargantuan role in a history that is still too politically charged to be written.

Yegor Gaidar will be remembered as one of the young economists who, surrounding Boris Yeltsin’s first government, were the midwives who managed the difficult delivery of the modern Russian state.

But he was as much a product of the old establishment that he did away with as of the reforming liberalism that he came to exemplify. An economist by training, he began his career as a researcher at several academic institutions. But like many young men with an establishment background, he was also a member of the Communist Party of the Soviet Union, editing the economy section of the party journal “Communist” between 1987 and 1990 and writing a column for the party newspaper “Pravda.”

Critics later accused him of hypocrisy, saying he used his editorship at “Communist” to smother dissenting views. But there was no contradiction between his membership of the Communist party and his role as a reformer, said his former assistant Nikita Maslennikov, an advisor to the Institute for Modern Development. “Communist” was a relatively progressive think tank, and Gaidar was typical of the reform-minded offspring of the Soviet establishment who drove perestroika. “Lots of people were members of the party, even Yeltsin himself. Yegor never changed,” said Maslenikov.

Gaidar began his government career in November 1991, just months into Boris Yeltsin’s first term as president of Russia and one month before the Soviet Union was finally dissolved. Why Yeltsin plucked Gaidar from relative obscurity to serve as his deputy prime minister for economic issues is not entirely clear. One explanation is that Yeltsin was attracted by the young team of supporters he brought with him. “I think Yeltsin recognized he was a very active person,” said Maslenikov. “And Yegor was prepared to take responsibility before Yeltsin. That, too, was important.”

Gaidar went on to become Yeltsin’s Finance Minister and then, in June to December 1992, his acting prime minister.

Despite his apprenticeship in Soviet academic economics, Gaidar was a convinced free-market liberal, a position he refused to surrender either in the face of criticism of his own reforms, or the current economic crisis. “Capitalism will survive another funeral,” he told the BBC in an interview in March.

But his own role in the introduction of capitalism to Russia was far more controversial. He and the other young reformers in Yeltsin’s first cabinet presided over what became known as “shock therapy,” the rapid release of price controls advocated by the American economist Jeffrey Sachs.

The young reformers managed to slash the budget deficit and introduce a market economy, but the reforms were also accompanied by hyperinflation and economic hardship comparable to the Great Depression. Enterprises across the formerly state-subsidized economy hemorrhaged jobs as they struggled to adapt to the market environment, and the liberalization of prices in January 1992 and adjustment of the exchange rate revealed the fundamental weakness of the ruble, with the result that many Russians found the value of their savings simply wiped out. That may not have been Gaidar’s fault – the price controls were artificial, and would have had to come down at some point - but those whose names were associated with the reforms became objects of ridicule and even hate. A poll in 2007 by the state-owned All Russia Public Opinion Research Center (VTsIOM) found some 58 percent of Russians had a negative attitude to the reforms.

In Gaidar’s defense, it is certainly true that many (though not all) of his most controversial moves, including the cancellation of price controls were “inevitable,” said Leonid Grigoriev, a prominent economist who briefly served alongside Gaidar in the Yeltsin government. “And price controls had already largely been lifted by the last communist government – it wasn’t one shock,” he added. But whether Gaidar and his supporters’ reforms caused the economic nightmare of the early 1990s with their reforms, or whether the chaos was simply the result of decades of economic mismanagement during the Soviet Union, is still a matter of academic debate.

“The history book of the early reforms has not yet been written,” said Leonid Grigoriev, an economist. “The subject has been too politically charged in the past two decades. But when it is, Gaidar will have a huge place in it.”

But the economic reforms that Gaidar is mostly remembered for occurred alongside no less dramatic political reforms. And regardless of how well thought-out his economic policy was, he does deserve credit for the fact that Russia’s transition from communism was both lasting and relatively bloodless. “He had a hugely positive role in the political transformation of Russia,” said Grigoriev.

That sentiment was echoed by others. “It was Russia’s huge good fortune that at one of the most difficult moments in its history it had Yegor Gaidar,” his Yeltsin cabinet colleague and fellow reformer Anatoly Chubais wrote on his blog. “In the early 90s he saved the country from famine, civil war and disintegration.” Even Prime Minister Vladimir Putin, who has largely built his political reputation on repudiating the carelessness of the Yeltsin-era reformers, praised Gaidar for his “integrity and courage.” “Not every public figure is called upon to serve his country at the most critical stages of its history. Yegor Gaidar honorably discharged this challenging task, displaying the best personal and professional qualities,” Putin said in a telegram to Gaidar’s family.

Gaidar’s most high-profile part in keeping the peace came in 1993, when he appealed to Muscovites to support the government during the constitutional crisis that had brought the country dangerously close to civil war. But his involvement in politics outlived his influence on policy. After leaving the government, he briefly entered parliamentary politics as the leader of the liberal pro-Kremlin Russia’s Choice faction in the Duma, but resigned in January 1994. In 2001 he returned to the political fray as a member of the Union of Right Forces (SPS). But the center-right liberalism that he championed never again entered the political mainstream, and after a string of disappointing elections, the SPS folded in 2008.

He retained enemies, however. In November 2006, he was found unconscious in his hotel room in Ireland, the victim of an apparent poisoning. Who did it is a mystery – Gaidar himself kept quiet on the issue, only ever hinting that the culprits were enemies of the Russian authorities. Others, however, have pointed the finger at the Russian secret services.

His steadfastness in pursuit of his painful reforms and his political ideals earned him a reputation for courage and honesty amongst those who knew him. “He did what he considered right. He was extremely courageous in what he was doing. Even fearless,” said Grigoriev. “Courage and wisdom,” was how Maslenikov characterized him. “His main aim was honest: he wanted a normal live for his compatriots.”