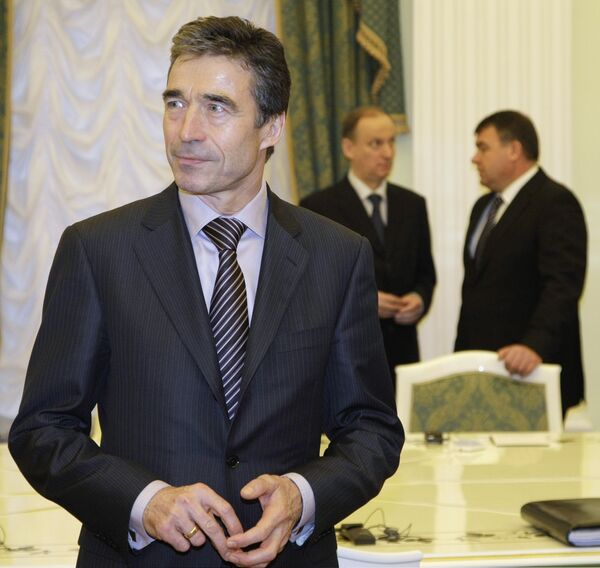 Speaking to reporters after talks with President Dmitry Medvedev, Rasmussen said he was inviting Russia to step up its assistance in Afghanistan, including by supplying helicopters, spare parts and fuel, and by training pilots.

This is the first official visit to Russia by the Danish NATO chief, who took office in August.

Relations between the military bloc and Moscow have improved in recent months after being frozen in the wake of the August 2008 Russia-Georgia war. Russia has been unhappy about NATO's eastward expansion.

"I do believe that it's also essential for Russia that we succeed in Afghanistan," the NATO chief said after talks in the Kremlin. "If Afghanistan once again becomes a safe haven for terrorists, then Russia would be among the victims, as terrorists could easily spread from Afghanistan through Central Asia to Russia."

Foreign Minister Sergei Lavrov said the president had instructed the government to study the NATO chief's proposals and respond.

At a meeting earlier on Tuesday, Rasmussen and Lavrov acknowledged differences in relations between NATO and Russia, but said they should not affect their common interests.

Rasmussen also said the alliance seeks to expand its military transits to the war-torn country via Russia and suggested Moscow do more to train Afghanistan's police force.

NATO was reported to be looking to supply lethal cargoes by railroad across Russia to Afghanistan. Russia currently allows the transit of nonlethal supplies for NATO and U.S. troops in Afghanistan.

Lavrov said Moscow hopes NATO will step up it efforts against drug trafficking in Afghanistan and reiterated a proposal the bloc join efforts with the post-Soviet security group CSTO.

"We would like to hear the response to our proposals," Lavrov said.

Russia's antidrug committee said earlier this week that illicit drug flows into Russia, mainly from Afghanistan, have almost doubled in the past year.