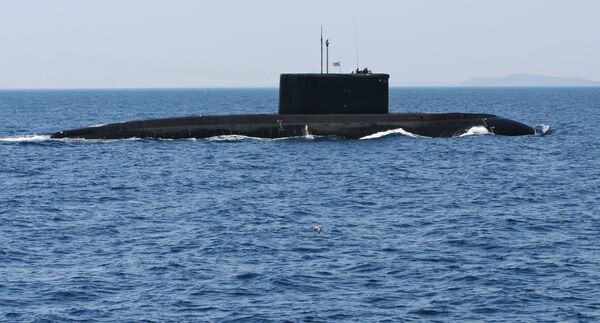 © RIA Novosti . Vitaliy Ankov
/
Go to the photo bank
Subscribe
The start of construction of Russia's fourth Borey-class nuclear-powered submarine has been postponed from December to the first quarter of next year, a Defense Ministry official said on Tuesday.

The start of construction of Russia's fourth Borey-class nuclear-powered submarine has been postponed from December to the first quarter of next year, a Defense Ministry official said on Tuesday.

Construction of the Project 955 Svyatitel Nikolai (St. Nicholas) ballistic-missile submarine was to begin on December 22 at the Sevmash shipyard in the northern Russian city of Severodvinsk.

The keel-laying ceremony was timed to coincide with the shipyard's 70th anniversary.

The official, who requested anonymity, stressed that the project was not being "frozen" but simply delayed for "organizational and technical reasons."

He did not specify the reasons.

Construction costs totaled some $713 mln, including $280 mln for research and development.

Two other Borey-class nuclear submarines, the Alexander Nevsky and the Vladimir Monomakh, are in different stages of completion. Russia is planning to build eight of these subs by 2015.

However, the submarine's putting into service could be delayed by a series of setbacks in the development of the troubled Bulava missile, which has officially suffered seven failures in 12 tests.

However, some analysts suggest that in reality the number of failures was considerably larger. For example, according to Russian military expert Pavel Felgenhauer, of the Bulava's 12 test launches, only one was quite successful.

Borey-class submarines have been exclusively designed for the Bulava, and redesigning them for the Sineva would be a major setback for the Navy's plans.