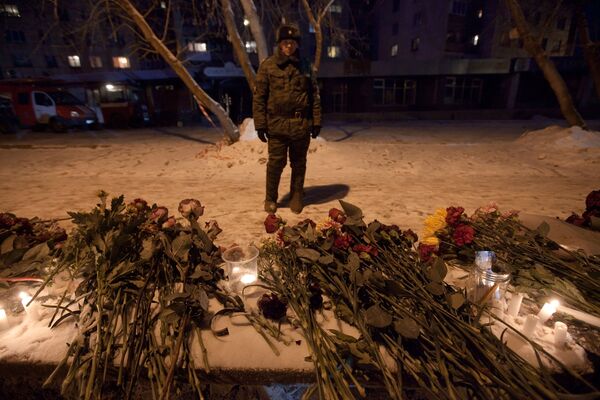 © RIA Novosti . Ilya Pitalev
/
Go to the photo bank
Subscribe
The death toll from last week's nightclub fire in a Russian Urals city has risen to 146, after one more person died in hospital, the Perm administration said on Sunday.

The death toll from last week's nightclub fire in a Russian Urals city has risen to 146, after one more person died in hospital, the Perm administration said on Sunday.

The administration said that a 27-year-old woman died at Moscow's Vishnevsky hospital, adding that 84 people still remained in hospitals.

The fire engulfed the Lame Horse nightclub in the west Urals city in the early hours of December 5 after an indoor fireworks display went awry.

The preliminary investigation revealed serious violations of fire safety regulations at the club.

The regional government of the Perm Territory and Perm Mayor Arkady Kats resigned on Wednesday over the fire. The new government is expected to be formed as soon as the investigation into the cause of the fire is completed.

On Tuesday, Russian Emergencies Minister Sergei Shoigu sacked a chief fire inspector and six other officials in the Perm Territory over the incident.

The Perm fire was the deadliest Russia has seen in half a century. In 1961, a total of 110 people died in a fire that broke out in a wooden school in Chuvashia.

Checks are being conducted at nightclubs and other leisure and entertainment facilities across the country in the wake of the tragedy and on the eve of the New Year festivities, which are traditionally accompanied in Russia by firework displays.

A ministry spokesman said 425 venues in the Russian capital were checked for safety, and five of them were already suspended by courts. "Materials on 54 facilities have been submitted to courts to consider suspending their activities," he said, adding that 390 officials and legal entities were fined.