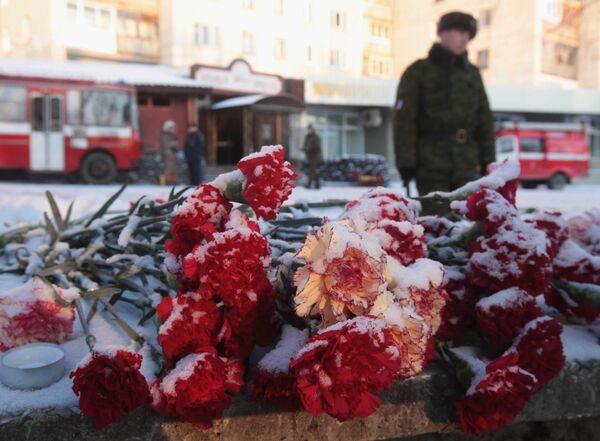 Another victim of last week's fire in a Russian nightclub has died, bringing the death toll to 143, emergency services in the city of Perm where the tragedy occurred said.

Another victim of last week's fire in a Russian nightclub has died, bringing the death toll to 143, emergency services in the city of Perm where the tragedy occurred said.

Almost 90 people remain in hospitals in Perm, Moscow, St. Petersburg and Chelyabinsk following the blaze, which engulfed the Lame Horse club in the west Urals city in the early hours of December 5 after an indoor fireworks display went awry.

The immediate death toll from the fire was 102, and 41 have died since.

Doctors say the victims have extensive burns and toxic poisoning of internal organs, many of them in critical condition.

The artistic director along with two other Lame Horse executives and the director of the fireworks supplier are under investigation over the accident.

Negligence charges were brought on Friday against two more senior emergencies and fire safety officials in the city, who were sacked along with a host of other officials earlier this week. They face up to seven years in prison if convicted.

Emergency Situations Minister Sergei Shoigu said in a newspaper interview that inspectors had for years turned a blind eye to breaches of fire safety in the nightclub. He said the probe had revealed numerous breaches in the club, including those committed during reconstruction several years ago.

President Dmitry Medvedev demanded on Tuesday punishment for those to blame for the tragedy. He called "the hosts of the show" in the club "irresponsible scoundrels," but also highlighted local authorities' severe negligence.

The government of the Perm region resigned on Wednesday over the tragedy.