Russian Navy's days could be numbered 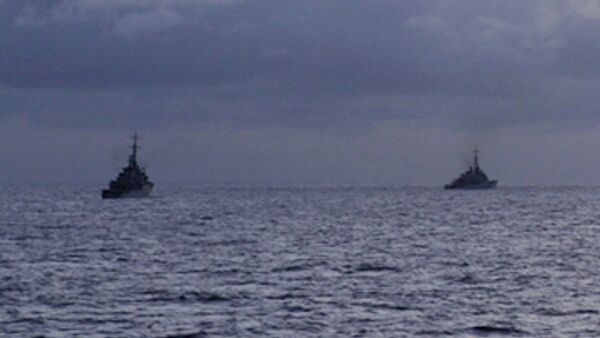 The Russian Navy is building and modernizing warships. In the next few months, the big anti-submarine ship Vitse Admiral Kulakov will resume combat duty with the Northern Fleet.

The Russian Navy is building and modernizing warships. In the next few months, the big anti-submarine ship Vitse Admiral Kulakov will resume combat duty with the Northern Fleet.

A second warship, Project 1155, the Admiral Kulakov was commissioned in 1982 and was on combat duty with the Northern Fleet until March 1991, when it retired for repairs that lasted more than 18 years.

In fact, the ship's fate closely resembles that of Russia. Its repairs were suspended in 1993 for lack of funds, and it was plundered in the late 1990s. The authorities even considered scrapping it, but instead resumed repairs in the mid-2000s.

In late November 2009, Admiral Vyacheslav Popov, former commander of the Northern Fleet, said that in the next ten years Russia might lose the bulk of Soviet-made surface ships.

"The funds allocated [to the Navy] are insufficient to build new long-range sea- and ocean-going warships and maintain our current warships in combat order," he said.

Warships built in the 1970s and 1980s currently make up the bulk of the Russian Navy. Their service life can be prolonged through repair, but not indefinitely.

The ocean-going warships, which form the core of the surface fleet's combat group, are the biggest problem. There are approximately 30 such warships of different types, from cruisers to frigates, including those in mothballs, but all of them should be replaced within 10-15 years. Otherwise the Russian Navy will degenerate into a third-rate coastal fleet unable to protect the country's interests outside its territorial waters or even on its coasts.

However, Russia is so far building only sea and coastal ships (corvettes and boats), and not very quickly at that. Project 20380 corvettes have a sufficient combat capability but cannot replace larger ships. Russia's largest warships being built now are two Project 22350 frigates, one of them to be commissioned in 2011 and the other one only laid down in 2009.

Given the sluggish pace of fleet renewal, Russia will have only 15-20 corvettes and seven or eight frigates of the new generation by 2025. This is not enough to reliably defend any theater of war in Russia, which has very long sea borders.

To change the situation, Russia should build more warships of the corvette and frigate classes faster and should also start building larger-class warships such as destroyers, in order to replace the large ships that are quickly becoming obsolete.

It should also continue the fleet repair and modernization program to prolong the service life of its best warships, such as the Admiral Kuznetsov air carrier and Projects 1144 and 1164 missile cruisers, until 2025-2030.

However, Russia's efforts are hampered by lack of funds and also by the disintegration of its shipbuilding industry and related sectors, which has dramatically undermined its ability to build warships.

To resolve the problem that developed over two decades, it is not enough to increase allocations to defense. The authorities must take emergency measures to rehabilitate all sectors of the shipbuilding industry, including the process for training personnel.

Cooperation with foreign shipbuilders could have a beneficial effect at this point. The government may not be sure of the need to buy foreign-made warships such as a Mistral-class helicopter carrier, but it certainly needs to promote cooperation with foreign companies to train workers and engineers, gain access to modern design and the practical skills necessary for building warships of different classes, and to buy cutting-edge equipment.

France's Mistral-class ship is capable of transporting and deploying 16 helicopters, four landing barges, up to 70 vehicles, including 13 battle tanks, as well as 450 military personnel. The vessel is equipped with a 69-bed hospital and can be used as an amphibious command ship.

In the 1990s Russia adopted a strategy of making friends with the world, wholeheartedly supported by its foreign partners, which gradually turned into a deliberate destruction of the country's defense industry. The negative effects of that strategy have reached a high point now. To mitigate them, Russia should adopt a strict and consistent policy embracing all related spheres, from education to law-enforcement.

There is very little time left to think about such a policy because the days could be numbered for the Russian Navy.