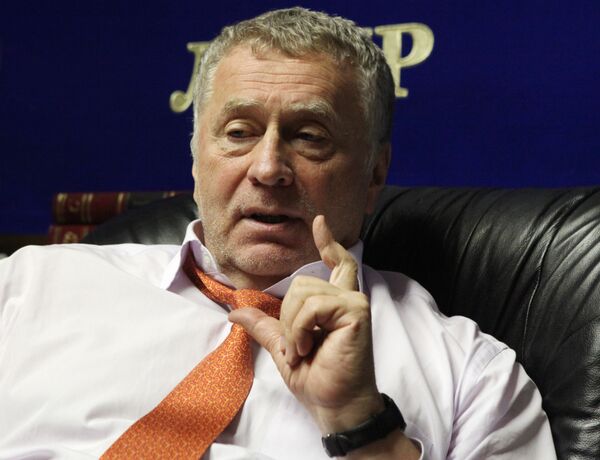 The ruling United Russia Party has accused an opposition party of holding a luxury banquet during the nationwide day of mourning over the deadly nightclub blaze, which left 141 people dead.

The ruling United Russia Party has accused an opposition party of holding a luxury banquet during the nationwide day of mourning over the deadly nightclub blaze, which left 141 people dead.

A United Russia lawmaker, Irina Yarovaya, accused the nationalist Liberal Democratic Party of Russia (LDPR) of holding the opening of an exhibition, followed by a banquet to mark the political party's 20th anniversary.

She referred to "recent publications" in the Russian press which say that the party leader, Vladimir Zhirinovsky, has allegedly made a luxury revel during the nationwide day of mourning, on December 7. The celebrations also included an exhibition devoted to the party's 20-year history, featuring, among other things, political advertising on the bottles of vodka and mayonnaise.

"The leader of LDPR began grand celebrations of the party's 20th anniversary. TV and society columns show a lavish party that he threw in honor of himself in the State Duma, as well as an exhibition of his personal achievements - from vodka to mayonnaise," a popular Russian tabloid wrote.

"This is complete disrespect for citizens of our country, for the families of the deceased," Yarovaya said, urging Zhirinovsky to "apologize... for such objectionable behavior."

An LDPR lawmaker, Vladimir Rokhmistrov, retorted by suggesting a vote for "medical examination of Yarovaya, to establish if she is sane," before his microphone was switched off.

Party leader Zhirinovsky said that the event was initially planned for December 7, but was cancelled as soon as Monday was declared a nationwide day of mourning.

"I officially announce that the LDPR fraction threw no parties on the mourning day," he said. "We did open the exhibition on Tuesday. There was no alcohol and no snacks. Only a cake," he said.

A blaze engulfed a nightclub in the west Urals city in the early hours of Saturday after an indoor fireworks display went awry. The death toll continues to climb as many are in critical condition.