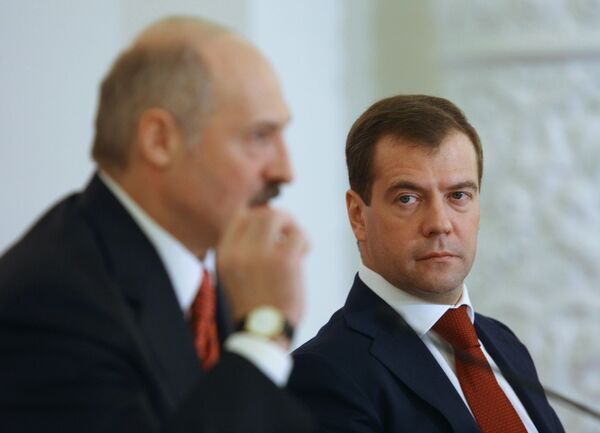 Russia and Belarus will discuss on Thursday further cooperation in energy, trade and military spheres at a session of the ruling body of the union state the two ex-Soviet neighbors are trying to build.

Russia and Belarus will discuss on Thursday further cooperation in energy, trade and military spheres at a session of the ruling body of the union state the two ex-Soviet neighbors are trying to build, a Kremlin source said.

The meeting of the union state's Supreme State Council is expected to result in the signing of a number of documents, including a program on coordinated actions in the sphere of foreign policy and a treaty on the development of military-technical cooperation.

Russian President Dmitry Medvedev and Belarusian leader Alexander Lukashenko will hold a private meeting prior to the council's session "to focus on further strengthening of the economic foundation of the Russia-Belarus integration especially in the light of a recent agreement between Russia, Belarus and Kazakhstan to launch the work of a customs union on January 1, 2010."

The source said the session will also adopt the union state's budget for 2010 in the amount of 4.87 billion rubles (about $161 million). The Russian share in the budget is 65%.

"Overall, the upcoming meeting is aimed at emphasizing the strategic nature of the mutually-beneficial partnership between Russia and Belarus and giving an additional boost to its development," the Kremlin official said.

Russia and Belarus have sought to form a union to ensure greater political, economic and social integration since 1996, but the process has stalled over a series of disputes.

However, both countries have recently reaffirmed their efforts to adhere to the founding principles of the Union State and move forward "in the interests of the well-being of Russia and Belarus."

The Russian president pledged in November a 30-40% discount on natural gas for Belarus in 2010, while Prime Minister Vladimir Putin said last week that a cut in energy prices for Belarus should coincide with Minsk's integration into the Union State with Russia.

Belarusian leader Lukashenko said on December 8 that Russia and Belarus had been successfully strengthening defense and security and formulating common positions on international issues, and had achieved high levels of mutually advantageous cooperation in production and research over the past decade.