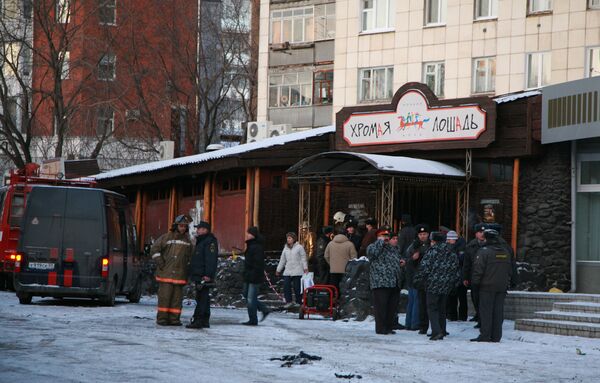 A Russian nightclub in the Urals that recently saw a fire that killed 121 people and left over 100 injured was designed for no more than 50 visitors, the local governor said.

A Russian nightclub in the Urals that recently saw a fire that killed 121 people and left over 100 injured was designed for no more than 50 visitors, the local governor said.

The fire engulfed the Lame Horse nightclub in the west Urals city of Perm in the early hours of Saturday after an indoor fireworks display went wrong.

"In 2001 a reconstruction project was agreed on...with a capacity of no more than 50 visitors," Perm Territory governor Oleg Chirkunov told a respected Russian daily.

He also said that the massive death toll was down to the illegal construction of a wall blocking off previously accessible exits.

"Pyrotechnics is, in my view, the reason for the fire. But it is not the reason for the tragedy... If the fire was started with a match - should we ban matches?...But what is frightening is that the people died due to a different reason," Chirkunov told Izvestia.

Three nightclub managers and the Pirotsvet pyrotechnic company director will face criminal charges. The head of the regional fire safety watchdog and six of his subordinates were suspended from their duties following the tragedy.

Alexander Titlyanov, who rented the club, died in hospital on Wednesday of injuries sustained during the fire.

Russia observed a national day of mourning on Monday for the victims of the blaze. Russian President Dmitry Medvedev demanded on Tuesday that all those responsible for the fire be brought to justice.