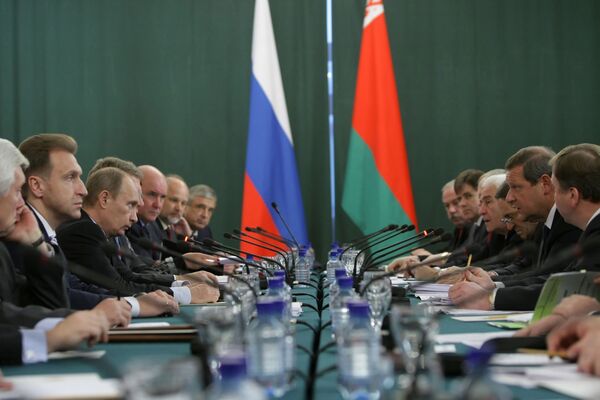 What were the two presidents' objectives? Critics say they were guided by ulterior motives, suggesting that Lukashenko hoped to become president of a large Union State and that Yeltsin felt guilty for presiding over the dissolution of the Soviet Union. They claim he wanted to be remembered as the leader who started the reunification of the former Soviet republics by signing the Union State agreement with Belarus.

On the other hand, the two presidents' motives might be considered commonplace as politicians often make history from a mixture of political ambition, envy or impossible dreams.

Unfortunately, some provisions of the Union State agreement have not materialized, such as a common currency (planned for 2004), common citizenship, and the Constitutional Act designed to streamline the two countries' legislation.

If we look at the agreement today, we see that for Belarus it became the final chord of a difficult 20th century which brought the chaos of disintegration and division to Eastern Europe.

The East Slavic border nations, nearly all of which were part of the Russian Empire at the beginning of the 20th century, were an ethnic puzzle of Belarusians, Russians, Poles, Lithuanians, Germans and Jews.

The puzzle was broken up after World War I, with Poland being the first to create a sovereign state in 1918. Belarus was united with Lithuania in 1919, but a year later the Lithuanian-Belarusian Soviet Socialist Republic split into sovereign Belarusian and Lithuanian states.

During World War II, the Nazis liquidated and dispersed one of the key ethnic minorities in the region, Jews, thus inflicting deep wounds on the Belarusian nation.

Stalin easily changed borders within the Soviet empire, moving Poles closer to Poles, bringing Lithuanians together in a close-knit community, and uniting Belarusians and Ukrainians by not formalizing borders.

However, these borders became reality in the late 20th century. Each ethnic group in that puzzle, from Jews to Lithuanians, now has its own state. The divorce looked final, but it turned out that they missed their former neighbors.

Even the Poles, who probably worked for independence harder than any other East European nation, are now demonstrating a lively interest in their eastern neighbors. There are no centers studying individual West European countries in Poland, although it badly wanted to become part of Western Europe. It does, however, have the Center for Eastern Studies set up in 1990 at the initiative of a non-Communist prime minister, Tadeusz Mazowiecki.

Marek Menkiszak, a Russia analyst at the Center for Eastern Studies, said: "We are concerned about the Customs Union of Russia and Belarus because we do not know if it will limit the sovereignty of Belarus or change our trade process with Russia."

Yeltsin's and Lukashenko's motives and indeed their very names will be forgotten, but the feeling of "abnormality" from the former ethnic puzzle's break-up will persist for years. As for the sluggish Russian-Belarusian integration projects, they do not look hopeless against Ukraine's attempts to integrate with Europe.

Integration can be conducted quickly only in a totalitarian regime. In a market economy with an emerging civil society, potential integration partners have to count every kopeck when coordinating interests and establishing common institutions.

The recent gas and dairy wars between Russia and Belarus have illustrated that these institutions are so far not steady on their feet. When Russia closed the gas tap, neither EurAsEC - the Eurasian Economic Community of Belarus, Kazakhstan, Kyrgyzstan, Russia and Tajikistan - nor the Parliamentary Council of Russia and Belarus protested the move.

It took the institutions of the European Union 50 years to gain their current strength, yet they are still not on a par with the national governments.