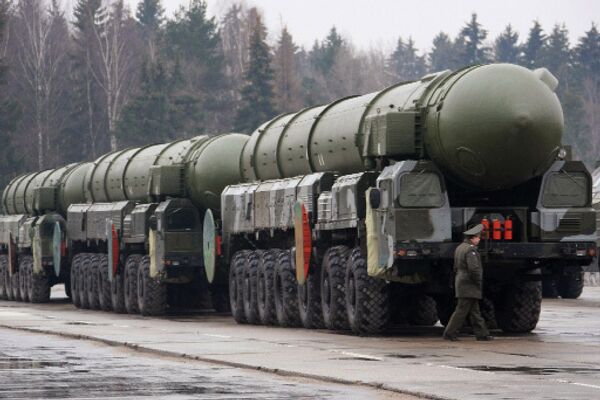 Russia's Strategic Missile Forces (SMF) will keep both silo-based and mobile ballistic missile systems in service until at least 2020, the SMF commander said on Tuesday.

Russia's Strategic Missile Forces (SMF) will keep both silo-based and mobile ballistic missile systems in service until at least 2020, the SMF commander said on Tuesday.

"To successfully accomplish the set tasks, the SMF will continue to have silo-based missile systems, which can provide an immediate response [to threats] and mobile systems featuring high survivability," Col. Gen. Andrei Shvaichenko said.

The general said the development of the SMF will stress the introduction of advanced missile systems although the existing systems will be kept operational until their extended service life expires.

Silo-based missiles constitute 45% of Russia's total ballistic missile arsenal. They carry about 85% of nuclear warheads deployed by the SMF.

The SMF commander said the number of missile systems and warheads in service in the future would depend on a new strategic arms reductions agreement between Russia and the U.S.

The new document to replace the START-I treaty, which expired on December 5, could significantly reduce the number of nuclear weapons possessed by both sides.

An outline of the new pact was agreed during the presidents' bilateral summit in Moscow in July and includes cutting their countries' nuclear arsenals to 1,500-1,675 operational warheads and delivery vehicles to 500-1,000.

The draft treaty is expected to be ready by the end of 2009.