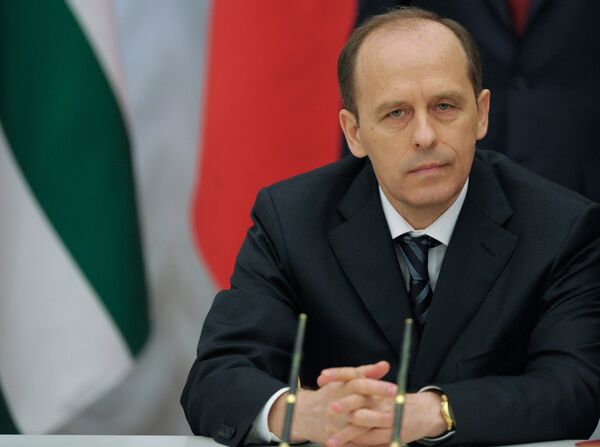 © RIA Novosti . Sergey Guneev
/
Go to the photo bank
Subscribe
Police and other security forces have prevented 81 terrorist attacks in Russia's volatile North Caucasus this year, the head of the Federal Security Service said on Tuesday.

Police and other security forces have prevented 81 terrorist attacks in Russia's volatile North Caucasus this year, the head of the Federal Security Service said on Tuesday.

Speaking at a session of the National Antiterrorism Committee, FSB chief Alexander Bortnikov said 42 antiterrorist operations and a series of reconnaissance and search operations had been carried out in the region so far in 2009.

"As a result, 81 terrorist crimes were prevented, 782 members of illegal armed groups were detained, more than 1,600 small arms, 490 self-made bombs and over 5.5 tons of explosives were discovered and confiscated," Bortnikov said.

Russia's mainly Muslim and ethnically diverse North Caucasus republics have been swept by an upsurge of violence recently.

Moscow announced an end to its decade-long antiterrorism campaign against separatists in Chechnya in April, but has since had to step up the fight against militants as skirmishes and attacks on police and other officials have continued.

Violence has also swept neighboring regions, where hundreds of people have been killed in militant attacks and skirmishes between security forces and gunmen.

Ingushetia's president was severely wounded and rushed to Moscow for treatment after a suicide bomber attacked his motorcade in June. Also in June, the interior minister was shot dead in Dagestan.

In the most recent incident, Islamists claimed responsibility for the November 26 explosion that derailed a speed train en route from Moscow to St. Petersburg, killing 26 people and injuring more than 90.

Bortnikov pledged to continue the fight against terrorists echoing the prime minister's statement earlier this month.

Vladimir Putin vowed a "ruthless fight" against militants in the North Caucasus, but said a new war is not expected in the region. Putin also acknowledged a need to tackle unemployment, organized crime, clan rivalry and corruption as causes of the ongoing violence in the region.