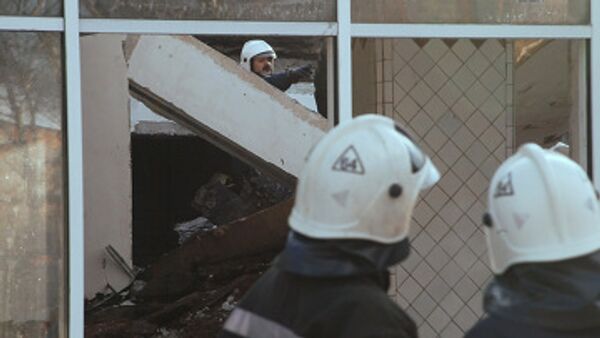 Police in Russia's Far Eastern city of Vladivostok on Monday stared to investigate the collapse of a public ice rink, a representative of the Primorye Territory prosecutors said.

Police in Russia's Far Eastern city of Vladivostok on Monday stared to investigate the collapse of a public ice rink, a representative of the Primorye Territory prosecutors said.

The roof of the Polyus (Pole) ice rink collapsed on Saturday evening, apparently due to a large accumulation of snow during a winter storm in the region. No one was hurt as skaters noticed the roof begin to fail in time to leave the building.

"A police investigation will determine the cause of the collapse of the Polyus ice rink's roof," deputy prosecutor Irina Nomokonova said on Monday. "A conclusion will also be drawn on whether the roof met strength and safety standards."

Several eyewitnesses, who were on the ice or relaxing in the venue's cafe, said the roof first began to crack and then within a minute slowly sag. There was just enough time for skaters to leave the rink before part of the roof crashed down onto the ice.

The ice rink was built two years ago by a private company and was opened in February 2008. The rink operates year-round, with space for up to 150 people, and it is also used by Primorye Territory hockey teams.

Twenty-eight people died in February 2004 when the roof of an indoor water park in Moscow collapsed under the weight of snow, with dozens injured. Investigators concluded that the design of the center, which had opened in 2002, was flawed.

Enforcement of building regulations can be patchy in Russia, and checks are to be carried out on public venues across the country following a fire in a Perm nightclub on Saturday that killed more than 100 people.