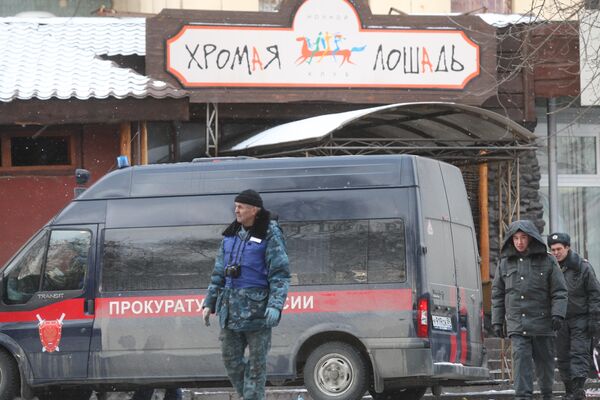 © RIA Novosti . Ilya Pitalev
/
Go to the photo bank
Subscribe
All the managers of a nightclub in the Urals city of Perm where Saturday's deadly fire claimed the lives of 112 people have been detained, investigators said on Sunday.

All the managers of a nightclub in the Urals city of Perm where Saturday's deadly fire claimed the lives of 112 people have been detained, investigators said on Sunday.

The tragedy occurred on the night of December 4-5during a party to celebrate the Lame Horse club's eighth anniversary when an indoor fireworks display started a fire that consumed most of the 500-square-meter venue.

"Investigators have detained the entire management of the Lame Horse club. The club's owner is in hospital. He is among the suspects in the nightclub fire case but investigative actions with him are so far impossible," investigators said.

"We are planning to file a petition this evening to issue arrest warrants for four suspects. Investigation has found the proofs of these persons' complicity in the tragedy," she said.

Zabbarova also said that fireworks prohibited for indoor use were used at the Lame Horse nightclub.

Many victims were trapped and choked on smoke as they attempted to escape through the club's single exit.

Over 120 were injured in the nightclub fire, with 98 people with severe burns and injuries delivered to Russia's best burn treatment centers and hospitals in Moscow, St. Petersburg and Chelyabinsk in the Urals. As many as 26 people in grave though stable condition were staying at Perm hospitals, the emergencies service said.

A criminal case has been opened for violations of fire regulations that resulted in multiple deaths, which carries a maximum sentence of seven years in prison.

President Dmitry Medvedev, who declared Monday a day of national mourning, accused those running the club of gross negligence, and called for harsh punishment.