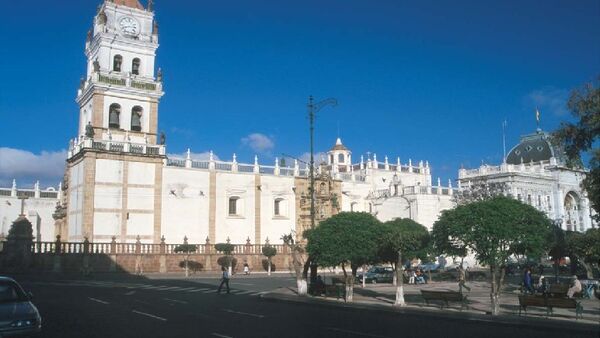 Bolivia will hold presidential elections on Sunday, with seven candidates expected to run against the incumbent president, Evo Morales.

Bolivia will hold presidential elections on Sunday, with seven candidates expected to run against the incumbent president, Evo Morales.

The candidates include three indigenous Americans, one woman, one former military official, a lawyer, and a businessman.

The presidential and parliamentary elections will be held in line with Bolivia's new constitution, which came into effect on February 7. Some 5 million of voters are expected to cast ballots.

President Morales, who leads the Movement for Socialism (MAS) party, currently has a popularity rating of about 60% and is expected to comfortably win the vote.

Morales's main competitors are Samuel Doria Medina, leader of the National Unity Front (UN), and Manfred Reyes Villa, a former military official and candidate of the Progress Plan party (PPB-APB), with popularity ratings of 9,7% and 8,6% respectively.

The next presidential term will run until 2015.

Bolivians will also elect a vice president, 130 lawmakers and 36 senators during the Sunday's polls.

Some 300 international observers representing the European Union, the Organization of American States and the U.S. Carter Center are expected to monitor the elections. About 37,000 policemen will provide security of the voters.

Morales has led Bolivia since 2006, and is the country's first fully indigenous national leader. Since he came to power, industries including oil and gas and transportation have been nationalized to fund social programs.