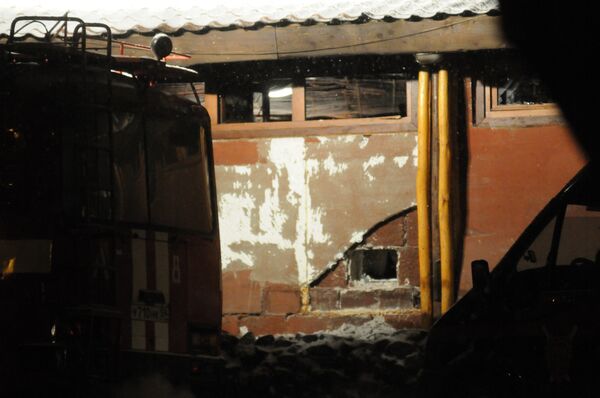 © RIA Novosti . Mikhail Voskresenskikh
/
Go to the photo bank
Subscribe
Security guards of a Perm nightclub, where more than 100 people were killed in a fire on Saturday, were trying to save people from the blaze, but sealed doors hampered their efforts.

Security guards of a Perm nightclub, where more than 100 people were killed in a fire on Saturday, were trying to save people from the blaze, but sealed doors hampered their efforts, witnesses said.

Second leaves of each of the club's two double doors, an interior and an outer, were hermetically sealed, and the guards were trying to break them down, a friend of two of the club's go-go dancers said.

The women, who were dancing on the stage when the fire broke out, and some of the club personnel managed to escape from the building via a backdoor, located behind the stage, Sergei said. Club visitors did not know about the backdoor, he said.

Sergei said one of the dancers is currently at home. Another one, who received burns of arms while trying to protect her head from melted plastics dropping from a ceiling, was admitted to hospital, he said.

He also said emergency lighting panels showed only one evacuation way — via the main exit. He quoted club workers as saying the club's owners had previously received fines for breaching fire safety regulations, and were due for an inspection next week.

The flames spread fast as the club's ceiling and walls were decorated with twigs, Sergei added.

The tragedy, which claimed at least 106 lives and left more than 120 people injured, occurred in the Urals city's Lame Horse club during a party to celebrate the club's eighth anniversary when an indoor fireworks display started a fire that consumed most of the 500-square-meter venue.

Witnesses of the tragedy are in a state of shock. They remember a strong blaze and a pungent smoke which filled the building when the fire broke out. People were stifled by smoke and were trying to find a backdoor to escape from the club, they said.

"Some two dozen evacuated bodies are lying on the road. People overstep them, trying to find survivors, and drag [those alive] towards ambulance cars," a blogger nicknamed starina-klim said.

"There was a terrible smell. I will remember it my whole life through. All the glasses were broken, young girls, wholly burnt, were carried in arms," Lidia, who was among the club visitors that night, told RIA Novosti.

Five people have been arrested in connection with the fire, with a sixth suspect in hospital following the tragedy.

President Dmitry Medvedev, who declared Monday a day of national mourning, accused those running the club of gross negligence, and called for harsh punishments.