Over 70 killed in Urals cafe blast 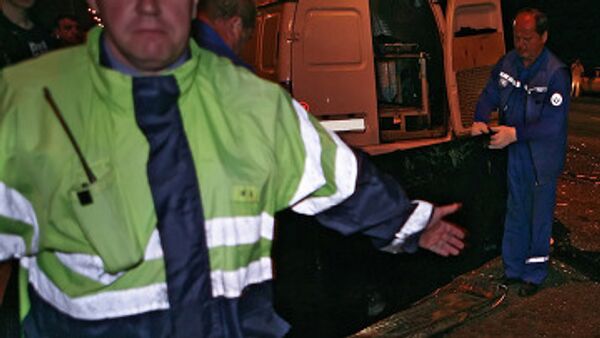 Subscribe
International
India
Africa
A blast in a cafe in the Urals city of Perm has killed at least 76 people and injured 114, an emergencies ministry source said on Saturday.

MOSCOW, December 5 (RIA Novosti) - A blast in a cafe in the Urals city of Perm has killed at least 76 people and injured 114, an emergencies ministry source said on Saturday.
About 200 people were in the cafe when the blast occurred.
The blast is believed to have been caused by breaches of fire safety rules while using pyrotechnics, a local emergencies ministry source said.
"Almost all dead and injured have already been taken away. The site of the tragedy is now cordoned off," the source said.
A local police source said most casualties were due to smoke and stampede that followed.
"According to preliminary data, a stampede occurred at the exit, and those who stayed at the cafe died of carbon dioxide poisoning," the source said.
The blast occurred at 23:15 Moscow time [20:15 GMT], and was followed by fire. Firefighters have already brought the blaze under control. The building of the cafe is detached to a residential house, which was not damaged in the blast.
The majority of victims were cafe employees and their relatives, as the cafe marked its anniversary.
A criminal case was launched on charges of fire safety breaches. Investigators ruled out a terrorist attack.