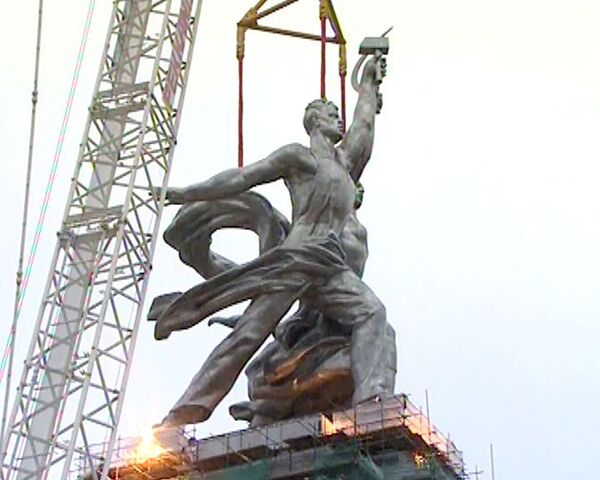 © RIA Novosti
Subscribe
International
India
Africa
Moscow's mayor unveiled on Friday a giant Soviet-era statue that was recently put back on its pedestal in northeast Moscow after a five-year restoration.

Moscow's mayor unveiled on Friday a giant Soviet-era statue that was recently put back on its pedestal in northeast Moscow after a five-year restoration.

The Worker and the Collective Farm Woman by Vera Mukhina, one of the most prominent statues to shape Moscow's landscape, was dismantled for restoration in 2003 and was initially expected to be returned in 2005. Authorities cited a lack of financing for repeated delays.

"A unique composition that symbolized the state's rapid ascent is now back in Moscow," Yury Luzhkov addressed an audience that cheered what he described as "a unique historical event."

A fireworks and light show accompanied the ceremony near all-Russia exhibition center VVTs, where the statue was reinstalled on Saturday.

The 24.5-meter high steel statue was first showcased at an exhibition in Paris in 1937. It features two figures which seem to be moving briskly, holding aloft a hammer and sickle, the symbols of the Soviet Union. Although the statue was created to glorify communism, the enduring strength and grandeur of the image is cherished by many Muscovites.

Work is planned for 2010 to equip an exhibition hall for 5,000 visitors in the statue's platform.

The entire structure, now rising 55 meters into the sky, is expansively lit so that it can be seen from far away.