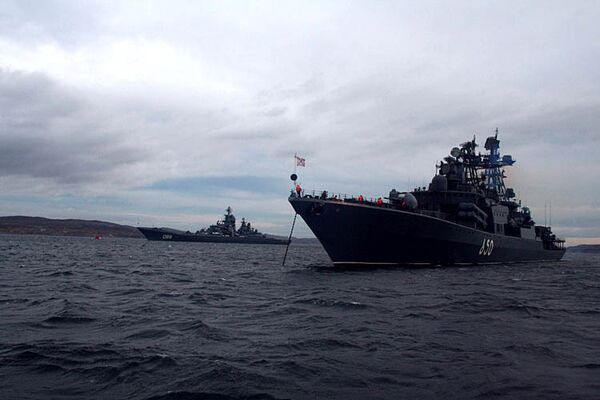 The Admiral Chabanenko destroyer from Russia's Northern Fleet has begun escorting commercial ships in the Gulf of Aden, a Navy spokesman said on Friday.

A task force consisting of Admiral Chabanenko and a support ship arrived in the Gulf of Aden on Monday to resume Russia's anti-piracy mission off the Horn of Africa.

"The Admiral Chabanenko destroyer is escorting a convoy consisting of seven tankers and cargo ships," the official said.

The Russian Navy plans to maintain a constant presence off the Horn of Africa, with each fleet dispatching warships on a rotation basis. Russia joined international anti-piracy efforts off the Somali coast in October 2008.

A Russian Pacific Fleet task force returned to its base in Vladivostok on November 23 after completing an anti-piracy mission in the Gulf of Aden.

The Admiral Tributs destroyer with two helicopters, a salvage tug, a tanker, and a naval infantry unit escorted commercial ships, conducted aerial reconnaissance, and searched for suspected pirate vessels off the Horn of Africa from July 30 to October 15.

During the tour of duty, the Pacific Fleet task force escorted a total of over 100 commercial vessels from 26 countries along the shipping lanes in the Gulf of Aden. The task force also held two anti-piracy exercises together with Chinese naval ships.

The task force was the third group of warships from the Russian Pacific Fleet engaged in the anti-piracy mission off Somalia, with the previous two task forces led by the Admiral Vinogradov and Admiral Panteleyev destroyers. Russia's first contribution to the international anti-piracy operations came from the Baltic Fleet.

Somalia has been without an effective government since 1991.

There were 324 pirate attacks worldwide on commercial ships this year to October 20, with 37 vessels hijacked and 639 hostages taken, according to the International Maritime Bureau's Piracy Reporting Center.

Attacks by Somali pirates in the Gulf of Aden and the east coast of Somalia numbered 174, with 35 vessels hijacked and 587 crew taken hostage.