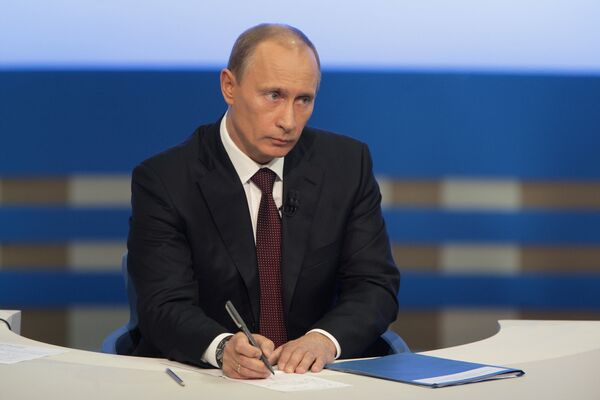 Soviet dictator Joseph Stalin's legacy remains ambiguous, and his achievements should be remembered as well as the crimes against the nation, Prime Minister Vladimir Putin said.

Soviet dictator Joseph Stalin's legacy remains ambiguous, and his achievements should be remembered as well as the crimes against the nation, Prime Minister Vladimir Putin said.

The issue came up in a TV and radio phone-in, when Putin was asked to pick questions from a large number of entries sent in by the public.

"In my view, you can't give an overall assessment. It's clear that from 1924 to 1953, the country led by Stalin changed fundamentally.

"There was repression. This is a fact. Millions of our citizens suffered from this. And this way of running a state, to achieve a result, is not acceptable. It is impossible.

"Certainly, in this period we encountered not only a cult of personality, but a massive crime against our own people. This is also a fact. And we must not forget this."

However, Putin said such historical chains of events must be considered "in their entirety."

"We remember perfectly well the problems, particularly in the last period, with agriculture - queues for food and such like. The things that happened in this sphere did nothing good for rural communities. But industrialization certainly did take place."

"We won the Great Patriotic War [WWII's Eastern Front]. And whatever anyone may say, victory was achieved. Even when we consider the losses, no one now can throw stones at those who planned and led this victory."

If the war had been lost, "we can't even imagine" the consequences, he said.