Putin: 'No information on Iran's work on nuclear weapons' 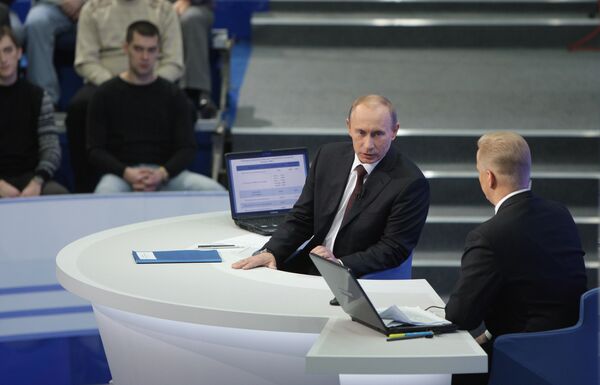 © RIA Novosti . Alexey Druzhinin
/
Go to the mediabank
Subscribe
International
India
Africa
"We have no information on Iran's work on nuclear weapons," the prime minister said during an annual televised question-and-answer session with Russians.

Russia has no information that Iran is working on the development of nuclear weapons, Prime Minister Vladimir Putin said on Thursday.

"We have no information on Iran's work on nuclear weapons," the prime minister said during an annual televised question-and-answer session with Russians.

The International Atomic Energy Agency (IAEA) censured Iran for withholding information on its controversial nuclear program in a resolution last week. It also urged Iran to freeze construction of its newly revealed uranium enrichment facility near the city of Qom.

The resolution was endorsed by Russia, Germany, Britain, China, France and the United States, the six nations involved in long-running nuclear negotiations with Iran.

Iranian President Mahmound Ahmadinejad said on Wednesday Russia "made a mistake" when it backed the resolution. He said Russia's decision to endorse the document was based on an "incorrect analysis of the current international situation."

The Iranian president also pointed out the plans on building uranium enrichment facilities were not a "bluff" and Tehran would go ahead with the program, adding his country would not report to the IAEA on its nuclear projects in the future.

Russia has consistently opposed sanctions over Iran's nuclear program, but President Dmitry Medvedev has said the country could support sanctions if Iran fails to allay Western doubts over the peaceful nature of the program.