World's largest atom smasher back to life after power cut 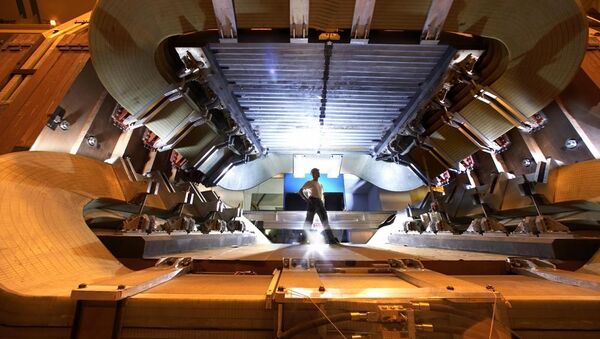 Scientists continue efforts to resume the regular operation of the Large Hadron Collider (LHC) following a recent power failure which shut down the device.

Scientists continue efforts to resume the regular operation of the Large Hadron Collider (LHC) following a recent power failure which shut down the device, the European Organization for Nuclear Research (CERN) said on its website.

The failure occurred on Tuesday in an 18 000-volt power line at one of the CERN's sites above the collider's subterranean circuit just a day after the device set a world record as the highest-energy particle accelerator by pushing its twin beams of protons to energy of 1.18 TeV.

The beams of protons started circulating again in both directions around the LHC late on Wednesday as no lasting damage has been made to the device as a whole, the CERN said on its website.

Experiments using the LHC were suspended last September shortly after a successful start, due to a malfunction of two superconducting magnets and a subsequent helium leak into the tunnel housing the device.

Work to repair the collider and upgrade it took over a year. A system to protect it from such accidents, named the Quench Protection System, was installed, and the first beams were injected into the LHC on November 20.

The construction of the collider cost $4.9 billion, while its repairs after the breakdown cost almost $40 mln.

According to CERN, the first physics at the LHC is scheduled for the first quarter of 2010, at collision energy of 7 TeV (3.5 TeV per beam).