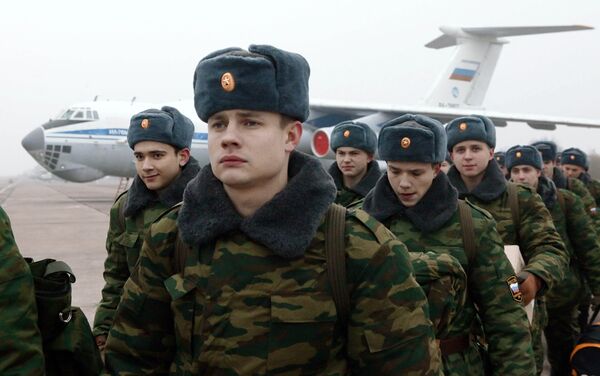 © RIA Novosti . Igor Chuprin
/
Go to the photo bank
Subscribe
The first phase of the ongoing military reform to overhaul the structure of the Russian Armed Forces as well as its troop control and recruitment processes officially ended by December 1, 2009.

The first phase of the ongoing military reform to overhaul the structure of the Russian Armed Forces as well as its troop control and recruitment processes officially ended by December 1, 2009.

The reform, which covers all fighting services, remains controversial in terms of necessity and effectiveness.

The army is the first service to be overhauled.

Despite previous reforms and troop cuts, the Russian army has remained a scaled-down version of the Soviet Army, which was primarily intended to conduct a large-scale war with prior general mobilization. Except for some postwar changes, the Russian army's structure has also remained virtually the same since 1945-1946. Four-regiment divisions were the main tactical units, while the recruitment system aimed to swell troop strength in wartime. But, a hypothetical large-scale non-nuclear conflict remains far-fetched. Besides, any local conflict can be won without resorting to mobilization.

So, what will the Russian army look like after the current reform?

The brigade structure seems to be more flexible and better suited for local conflicts because divisions are too cumbersome and regiments lack the required weaponry and equipment for conducting independent operations. Army brigades are supposed to be used as mobile permanent-readiness units capable of fighting independently with the support of highly mobile task forces or together with other brigades under joint command.

Moreover, each military district will establish rapid-deployment brigades from the airborne force's units.

The results of the reform are not yet very encouraging. A check of military units conducted by the General Staff shows that 60% of army brigades received C grades, 33% of units got B grades, and not a single brigade was given an A grade.

The inadequate readiness of military units can be explained by the transitional period's problems, insufficient personnel training levels, the lack of modern military equipment and other factors. All these problems should be tackled at the same time as the army's conversion to a new recruitment system to promote the latest in the training process.

Officers serving with logistics support units, headquarters of various levels and generals will be affected most of all, while the number of lieutenants and senior lieutenants will increase from 50,000 to 60,000.

The new armed forces structure calls for gradually reducing the number of positions held by conscripts. However, this objective has not yet been accomplished. Most army units have a mixed recruitment system stipulating 12-month service commitments for conscripts. This does not enhance combat readiness either.

The Russian air force will also be restructured. In 2010, the air force will comprise seven tactical commands to replace the four operational air armies.

Four tactical commands will control tactical aviation and army aviation units, while the remaining three will be given authority over strategic aviation, military transport aviation and aerospace defense units. These commands will control air bases and brigades of the air defense force. The above brigades will receive various air defense squadrons (units) depending on specific objectives.

Although this approach implies an enhancement to the air force's tactical and strategic flexibility, the success of this concept remains in doubt, especially if we consider the ageing air force fleet and its slow modernization pace.

Many other specifics should be clarified including the level of up-to-date equipment, combat training standards and confirming that armed forces armament needs are met.

At the same time, the Russian Defense Ministry does not prioritize media coverage for the reform's concepts, progress and prospects. Consequently, the reform remains a mystery to most Russians, including military personnel.