OSCE focus moves to the East 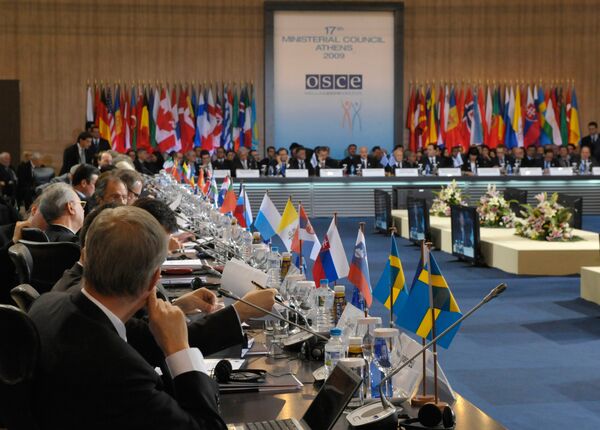 Next year, in accordance with a decision made at the 15th OSCE Ministerial Council in November 2007, Kazakhstan will preside over the Organization for Security and Co-operation in Europe (OSCE). Thus, a former Soviet republic will occupy this position for the first time

Next year, in accordance with a decision made at the 15th OSCE Ministerial Council in November 2007, Kazakhstan will preside over the Organization for Security and Co-operation in Europe (OSCE). Thus, a former Soviet republic will occupy this position for the first time. Under the circumstances, it would be natural to expect Kazakhstan to do all it can to consolidate its positions on the world arena. Its officials have already announced their intentions to include illegal immigration and drug trafficking on the OSCE agenda, problems that are particularly relevant for all CIS countries.

In 2002, the OSCE established political stability and economic development in Central Asia as one of its priorities. The OSCE has paid close attention to this region over the last few years for a number of reasons, the most important being the war in Afghanistan and the persisting threat of destabilizing neighboring countries.

A second, no less important reason for the growing European interest in the region is its energy resources, most of all in Kazakhstan and Turkmenistan.

For this reason, the European Union views Central Asia as a single political, economic, historical and cultural region characterized by high instability.

During his visit to Kazakhstan in late March 2006, the then OSCE Chairman Karel de Guht from Belgium described Central Asia as a vital region for the OSCE and Kazakhstan as a very important country within that region. In April 2007 the subsequent OSCE Chairman from Spain Miguel Angel Moratinos visited five Central Asian countries and also placed special emphasis on Kazakhstan. The fact that every new OSCE chairman visits Astana shows the importance the Organization attaches to relations with Kazakhstan.

What advantages does Europe hope to gain from such cooperation?

Economic issues occupy the first place. Europe is trying to diversify its energy supply channels, and is thus very interested in gaining access to Kazakh oil and Turkmen gas. This affects such projects as the Trans-Caspian pipeline, Nabucco and further development of the Baku-Tbilisi-Ceyhan pipeline.

However, Kazakhstan is ready to cooperation with Europeans on a whole number of different issues. Thus, Astana suggested establishing a special agency in the region to counter illegal immigration. This proposal was made by the then Deputy Minister and now Executive Secretary of the Kazakh Foreign Ministry Rapil Zhoshybayev, who stated that “Central Asia could become one of the OSCE outposts in dealing with global threats and challenges, such as illegal immigration.”

Indeed, it is possible to achieve tangible results in this area with assistance from the Kazakh government. Channels of illegal immigration into Europe and the rest of the world originate in Asia. A considerable number of illegal immigrants from South and Central Asia arrive in Russia and Ukraine.

Countering drug trafficking is the second European problem which Kazakhstan can help resolve. Drug-trafficking routes are similar to those of illegal immigration: Afghanistan – Central Asia – Kazakhstan. International experts believe that Afghanistan has accounted for 96% of the global heroin production over the last few years.

High-ranking OSCE officials have repeatedly discussed this problem with Kazakh President Nursultan Nazarbayev. They agreed that the OSCE will do everything it can to help Kazakhstan suppress this social evil, in particular, by establishing special centers for treating drug addiction in the country.

An agreement on setting up a Central Asian Regional Information and Coordination Center for combating the illicit trafficking of narcotic drugs (CARICC) under UN auspices in Alma Ata was signed in September of this year at Nazarbayev’s initiative. The Center’s aim is to organize, facilitate and coordinate international operations to suppress illegal drug trafficking, and to ensure the collection, storage, protection, analysis and exchange of information on the issue. The agreement was signed by the presidents of Azerbaijan, Kazakhstan, Kyrgyzstan, Russia, Tajikistan, Turkmenistan and Uzbekistan.

All these initiatives attest to Kazakhstan’s attempts to make the most of its year in the OSCE presidency in order to consolidate its positions as a regional leader, to say the least. Astana also wants its presidency to produce concrete results rather than be a mere formality. In particular, Kazakhstan is planning to use the presidency to carry out its initiatives on international security.

It should be emphasized that this approach is receiving an equally warm response in Europe. After a ten-year break, Europeans particularly like the idea of convening an OSCE summit. France, Italy, Spain, Slovenia, Russia and the OSCE Parliamentary Assembly have already backed this proposal.

During his recent visit to Kazakhstan, OSCE Secretary General Marc Perrin de Brichambaut called this proposal a very good idea. “The summit can give the Organization new momentum and contribute to a strengthened stability in the region. Kazakhstan can serve as a model for many other nations. This particularly concerns the Kazakh leader’s policy in an area of interethnic and interfaith relations,” he said. Brichambaut expressed hope that Astana’s forthcoming OSCE presidency would open up new prospects for the Organization and contribute significantly to its development.