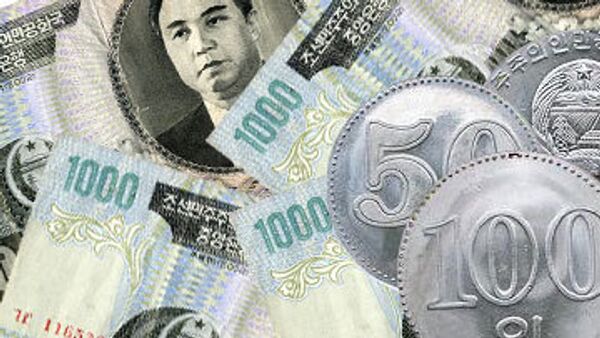 © Сollage by RIA Novosti
Subscribe
International
India
Africa
Russian experts warned on Tuesday that the redenomination of North Korea's currency will do little to help the reclusive communist state boost its economy.

Russian experts warned on Tuesday that the redenomination of North Korea's currency will do little to help the reclusive communist state boost its economy.

Pyongyang has redenominated its national currency, the won, knocking two zeros off the nominal value of banknotes in a bid to curb inflation and fight black-market currency trading.

Alexander Zhebin, the head of the Center for Korean Studies at the Far Eastern Institute of the Russian Academy of Sciences, said the move came against the backdrop of frozen economic ties with South Korea, a decrease in international humanitarian supplies and the accumulation of money supply by the population through the evolving market.

"The measure proves that though administrative mechanisms are still used for economic regulation, these levers are not effective enough and cannot be a solution to economic problems," Zhebin said.

Alexander Fedorovsky, who heads the Asia-Pacific department at the Institute of Global Economy and International Relations of the Russian Academy of Sciences, saw echoes of a Soviet tactic in the North Korean reform.

He said the North Korean authorities would use the monetary reform in a national propaganda campaign to show the population that the rich had been "pressed down."

However, the redenomination, which is Pyongyang's fifth attempt to improve its financial system, could signal a desire to change, said Alexander Vorontsov, chief expert on Korean and Mongolian issues at the Academy's Institute of Oriental Studies.

"This may pave the way for the launch of a deeper economic reform that calls for order in the financial system," Vorontsov said.