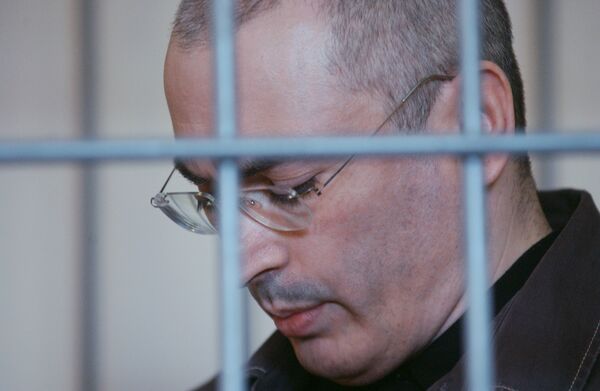 © RIA Novosti . Nikolay Fyodorov
/
Go to the photo bank
Subscribe
Former owners of the defunct Russian oil company Yukos have won a crucial ruling in The Hague allowing them to seek $100 billion in damages from the Russian government, The Financial Times reported.

Former owners of the defunct Russian oil company Yukos have won a crucial ruling in The Hague allowing them to seek $100 billion in damages from the Russian government, The Financial Times reported.

An international tribunal ruled on Monday that the Russian government is bound by the terms of the Energy Charter Treaty, even though the Russian parliament has yet to ratify it. The ruling opens the way for Menatep Group, the Yukos holding company, to sue the government in the tribunal over the state takeover of the company, the paper said.

Yukos was declared bankrupt August 1, 2006, after three years of litigation with tax authorities over the company's tax arrears and formally ceased to exist in November 2007, after its assets had been sold off through a series of liquidation auctions to meet vast creditor claims.

Yukos founder Mikhail Khodorkovsky was sentenced to eight years in prison for fraud and tax evasion. He has consistently denied all charges against him, saying he was punished for supporting the tiny pro-Western opposition, and that the liquidation of Yukos was engineered by corrupt government officials aiming to seize lucrative oil assets.

"This is a huge step forward. The tribunal has decided without any caveat that the Russian Federation is bound by the treaty and we are entitled to the treaty's protection . . . We now have to prove that Russia confiscated our assets without any compensation," the paper quoted Tim Osborne, director of Menatep, as saying.

Menatep is suing under article 45 of the Energy Charter, which protects investors against expropriations of assets by a state. Russia has sought to put forward its own version of an energy charter and has refused to ratify the existing document.

Menatep argues that Yukos paid its taxes in full, and that the back tax claims were retroactively and selectively applied to seize its property. Russia insists the tax charges and bankruptcy proceedings were fair.

According to the paper, a Russian government spokesman said that the ruling required "careful study" but questioned how the charter could be applied to Russia when "it is not legally in force."