What kind of ship do the Russian naval infantry need? 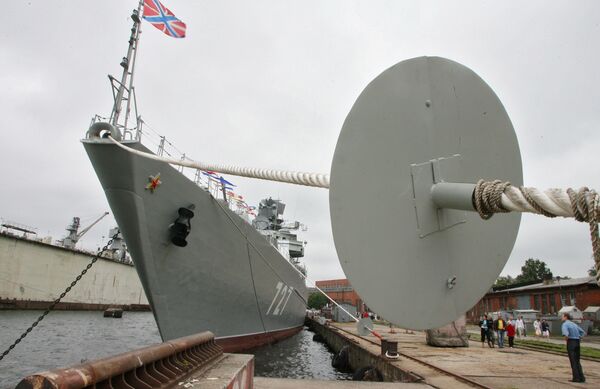 © RIA Novosti . Igor Zarembo
/
Go to the photo bank
Subscribe
November 27 is Russian Marines Day, which has been celebrated since 1996 in commemoration of the establishment of the first regiment of marines formed under a decree by Peter the Great on November 27, 1705

November 27 is Russian Marines Day, which has been celebrated since 1996 in commemoration of the establishment of the first regiment of marines formed under a decree by Peter the Great on November 27, 1705.

The first units designated for boarding and landing operations were formed in Russia in the 17th century - such a unit was stationed on the Oryol, the first Russian warship, which was built during the reign of Tsar Alexei Mikhailovich. Later, during the reign of Peter the Great, the Preobrazhensky and Semenovsky regiments of the Russian army were used as naval infantry during the Azov campaigns. And in 1705, when the Baltic Fleet was formed, the issue of establishing a permanent marine division was raised and resolved.

In three centuries of history, the Russian naval infantry have distinguished themselves in a number of battles and military engagements - from skirmishes with Swedes during the Great Northern War to the Five Day War in August 2008.

Today, there are five brigades of the Russian marines and a significant number of separate battalions and companies, including special operations units. The marines' main mission, as before, is conducting shore combat via amphibious landings, but now under contemporary conditions, this mission has been expanded significantly beyond its initial scope.

What kinds of missions do the Russian naval infantry perform today? Apart from their main missions, which remain amphibious assault, marine units can be used in peacekeeping operations, taking on pirates, special operations in local conflicts in remote theaters of war and in escorting ships with highly valuable cargo and so on.

To perform these missions, the naval infantry use various types of landing craft, armor, helicopters and other hardware, which generally do not differ from those of the land forces.

There is currently much discussion in Russia about improving the navy's combat capabilities and specifically those of the marines by purchasing Mistral-class amphibious assault ships from France and building a series of such ships at Russian shipyards.

On November 23, the Mistral itself arrived for a friendly visit to St. Petersburg, where a large number of Russian naval officers and experts experienced its capabilities and features first hand. On November 27, the Mistral departed for exercises with the Baltic Fleet, during which it was to execute deck landings using Russian helicopters, including Ka-52s.

The assessment of the ship was to a great degree based on the results of these exercises, but naval experts were already able to make some conclusions after visiting the ship.

In the opinion of military expert Mikhail Barabanov, the editor-in-chief of Moscow Defense Brief magazine, who personally inspected the ship, the Mistral is a "considered and balanced ship design that meets specific French requirements - an expeditionary ship for prolonged operations in remote waters, including use as a command ship, with minimal requirements for its own 'tactical component.'"

The ship's designation is determined by its design - to keep costs down, it was built with commercial technology, with significantly lower requirements for durability and is reminiscent of a civilian cruise ship. The Mistral's weaponry is limited to two short-range missile launchers, two 30mm anti-aircraft guns and four heavy machine guns. Consequently, the ship needs a strong escort.

The Mistral's landing potential is not extensive primarily because of its high standards of crew and troop comfort, which are based on the requirements of prolonged deployment.

Nevertheless, the Mistral does have considerable capabilities for use as a command ship, floating hospital, base for peacekeeping operations and to provide aid in emergency situations.

In general, the Mistral design would require extensive modification for Russian Navy use. It would need to provide for the deployment of Russian-made helicopters and to have its landing and air defense capabilities increased, taking into account the high probability that the ship would be used in serious armed conflicts (as compared with the French Navy's the missions).

Considering the number of likely modifications to the design and their cost, the feasibility of purchasing Mistral-class vessels arises. There are several other ship designs of a similar class and a number of shipbuilding companies that are capable of rapidly adapting an existing design to specific requirements.

We must not forget about the Russian Project 11780 universal amphibious assault ship design developed by the Nevsky Planning and Design Bureau in the 1980s. It stands to reason that this design is not ready for immediate production and would need extensive updating, but as distinct from the Mistral, this battleship was developed using more strict durability standards and consequently is capable of performing a wider range of operations if properly equipped.

All in all, it may be advisable to hold a tender among leading foreign and domestic firms with the goal of identifying the project most appropriate for Russian conditions, with subsequent joint modification and implementation. In this regard, cooperation with foreign shipbuilders may be useful for the Russian industry, which would be able to increase its efficiency by making operational universal amphibious assault ships for the navy.