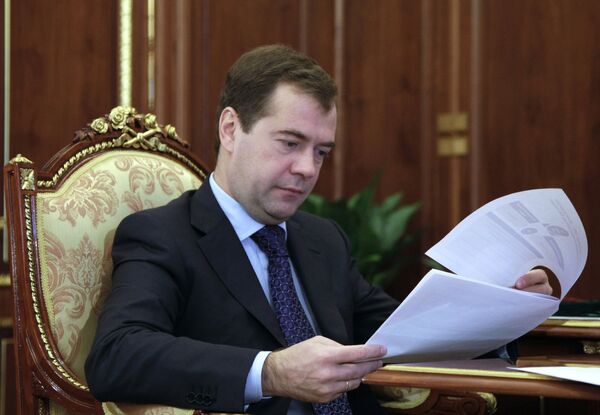 A draft treaty on European security prepared by Russia allows signatory states to provide military assistance to each other, the Kremlin said Sunday.

A draft treaty on European security prepared by Russia allows signatory states to provide military assistance to each other, the Kremlin said Sunday.

Russian President Dmitry Medvedev put forward the initiative to work out a treaty on European security on June 5, 2008, proposing that the principle of indivisible security be legally sealed in international law, preventing any state or organization from strengthening their security at the expense of others.

"In exercising its right of self-defense under Article 51 of the Charter of the United Nations, it shall be entitled to render the attacked Party, subject to its consent, the necessary assistance, including the military one, until the UN Security Council has taken measures necessary to maintain international peace and security.

"Information on measures taken by Parties to the Treaty in exercise of their right of self-defense shall be immediately reported to the UN Security Council," it says.

The UN Charter's Article 51 that Russia's draft refers to says: "Nothing in the present Charter shall impair the inherent right of individual or collective self-defense if an armed attack occurs against a Member of the United Nations, until the Security Council has taken measures necessary to maintain international peace and security."

The draft also says: "... the Party which has been attacked or threatened with an armed attack shall bring that to the attention of the Depositary which shall immediately convene an Extraordinary Conference of the Parties to decide on necessary collective measures."

"If an armed attack is carried out by, or a threat of such attack originates from a Party to the Treaty, the vote of that Party shall not be included in the total number of votes of the Parties in adopting a decision," it says.

The draft is open for signing "by all states of the Euro-Atlantic and Eurasian space from Vancouver to Vladivostok" as well as by the EU, NATO, the Organization for Security and Cooperation in Europe (OSCE) and the Collective Security Treaty Organization (CSTO) and the post-Soviet Commonwealth of Independent States (CIS).

The draft says the Parties shall not "assume international obligations incompatible with the Treaty" but adds that the document "shall not affect the right of any Party to neutrality."

The Parties will also have the right to withdraw from the treaty.

Medvedev has sent copies of the draft to heads of state and chief executives of NATO, the EU, the CSTO, CIS and OSCE.