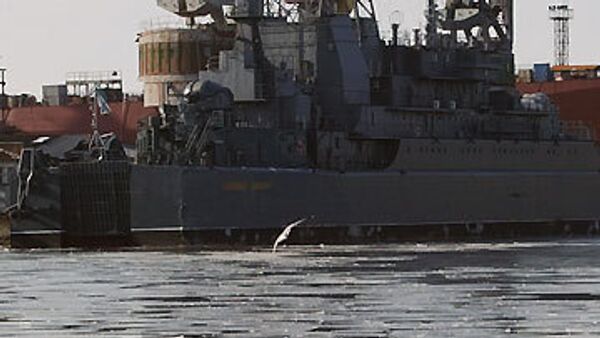 A Russian shipyard floated out the first of three frigates for India's Navy on Friday, a company spokesman said.

A Russian shipyard floated out the first of three frigates for India's Navy on Friday, a company spokesman said.

"The first of three Project 11356 frigates the company is building on an Indian order has been floated out," Sergei Mikhailov of the Yantar shipyard in Russia's Baltic exclave of Kaliningrad said.

Mikhailov previously said sea trials would not start straight away as "post-construction work" was still to be carried out. The trials should start in 2010, he said.

He said the ceremony was attended by senior Russian and Indian military and civilian officials.

"The ship was given a traditional 'baptism,' when prayers were read in Sanskrit," Mikhailov said. "India's consul general to St.Petersburg, Radhika Lokesh, was the godmother and smashed a coconut against the frigate. And a Russian shipyard worker smashed a bottle of Champagne, according to Russian tradition."

The new frigates will be armed with eight BrahMos supersonic cruise missiles.

In an earlier interview with RIA Novosti, Yantar's Director Igor Orlov said the shipyard is in talks with Russia's Vnesheconombank on "a $60 million loan to complete the construction of the three frigates for the Indian Navy."