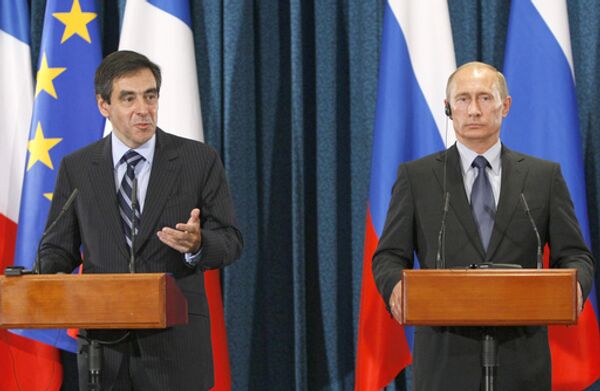 Though no decision was made on Russia's much-talked-about purchase of a Mistral-class helicopter carrier from France, the two parties struck a major deal bringing Electricite de France (EDF) into the South Stream gas project.

The CEOs of EDF and Russian energy giant Gazprom, Henri Proglio and Alexei Miller, signed a memo of understanding.

The two countries' financial market services agreed on information exchange. The two migration services signed an intergovernmental deal facilitating procedures for business trips to and from both countries, which will be of special help for Russian and French employees of joint ventures.

Two joint ventures were set up on Friday. Novatek, Russia's largest independent gas producer, and France's Total set up a JV to develop a gas condensate field in the Yamalo-Nenets Autonomous Area, while Russian power generator TGC-4 and France's Dalkia International S.A. established a joint venture to handle the production, transportation and distribution of thermal energy in Russia.

Under the deal, worth an estimated $65 million, the Russian company will receive a 20% stake in the project.

The Russian premier and his French counterpart, Francois Fillon, agreed to make 2010 the Year of Russia in France and the Year of France in Russia. The program includes over 150 cultural and communications events, 38 economic projects and over 70 events in science, education, sports and youth exchanges.

Fillon announced that Russian President Dmitry Medvedev would make a state visit to France in March 2010.

"Putin will return here in May," the French prime minister added.