Russian Navy could be in dire straits by 2015 - expert 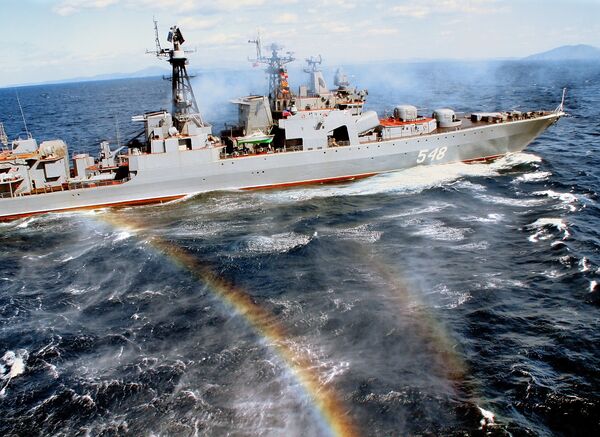 © RIA Novosti . Vitaliy Ankov
/
Go to the photo bank
Subscribe
The Russian Navy's combat capabilities could seriously decrease by 2015 due to a large-scale decommissioning of ocean-going warships, a former commander of the Northern Fleet has warned.

The Russian Navy's combat capabilities could seriously decrease by 2015 due to a large-scale decommissioning of ocean-going warships, a former commander of the Northern Fleet has warned.

"If the current situation [with shipbuilding] remains unchanged, we will face a grand-scale removal of ocean-going warships from service with the Russian Navy by 2015 and, as a result, a sharp decrease in its combat capabilities," Adm. Vyacheslav Popov said in the article "The Navy and Russia's national security" published in the "Russia's Security-2010" almanac on Thursday.

Popov, who is the chairman of the committee on national maritime policies in the upper house of parliament, said the main cause of the looming crisis was lack of financing allocated for construction of new ocean-faring ships.

"The allocated funds are insufficient to carry out large-scale construction of ocean-going ships and simultaneously maintain the existing fleet in combat-ready condition," the admiral said.

He said the Russian Navy received only one 2,000-ton corvette and no ocean-going warships in the past decade.

Russia's current weapons procurement program through 2015 does not envision construction or purchases of large combat ships either, although Russia has recently started building the new Admiral Gorshkov class frigates with a range of 4,000 nautical miles and plans to construct up to 20 of the vessels.

The first Admiral Gorshkov class vessel is being built at the Severnaya Verf shipyard and will be launched in 2011.

Meanwhile, Russia is negotiating a separate deal with France on the purchase of a Mistral class amphibious assault ship, worth 400-500 million euros (around $600-$750 mln). Prime Minister Vladimir Putin said during a visit to France on Friday that Russia had yet to make a final decision on whether to buy the warship.